The Bloodhound SuperSonic Car team yesterday pushed the big red button on the "biggest rocket fired in the UK for over 20 years"*. 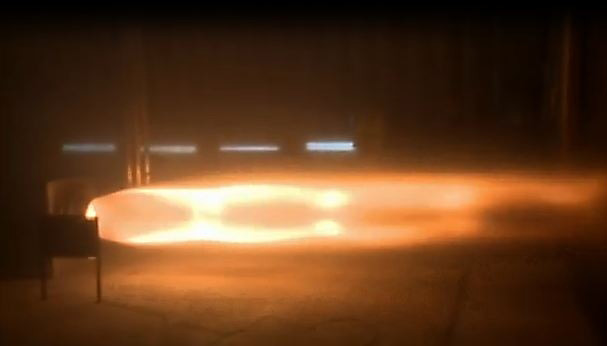 The test took place inside a hardened air shelter at the Aerohub, Newquay Cornwall Airport, which rattled as sound levels at the rocket nozzle peaked at 185dB, or "many times that of a Boeing 747 at take off", as the Bloodhound SSC announcement describes it.

The HTP oxidiser was pumped into the motor by a Cosworth CA2010 F1 engine at 600lbs per square inch, "equivalent to holding a large family car on the palm of your hand, and with enough flow to fill a bath in 5 seconds"**.

Motor designer Daniel Jubb - he of the magnificent handlebar 'tach - seemed satisfied with the smooth running of his baby. He told the BBC: "From what I could see, it looked very smooth indeed; and from the sound, there was not a lot of fluctuation - very steady."

Analysis of data from the test will determine if the hybrid's "unique star-shaped rubber fuel grain" did indeed burn evenly, although there's still a long way to go before the Falcon Hybrid Rocket can be bolted into the Bloodhound for an assault on the land speed record. 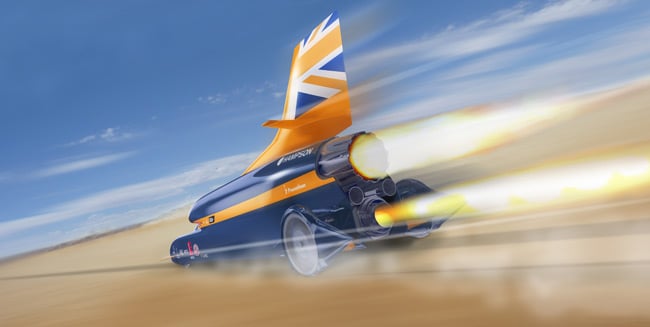 Artist's impression of the Bloodhound SSC thundering along

The team's first aim, though, is to hit 850mph (1,400kph), when pilot Andy Green takes the controls at the Hakskeen Pan dry lake bed in South Africa next year. ®

* In the 1980s, the Stonechat powerplants for the Falstaff research rocket produced 270kN (60,700lbf) during static tests.

** Readers are invited to calculate that flow in elephants per second.