Music making on Apple's iOS devices has long since migrated from mere display driven ditties to a range of additional hardware better suited to musicians. Alesis, Digitech and IK Multimedia, to name a few, are known music technology brands working the iOS instrument dock market. Nowadays, mainstream iDevice accessory vendors, such as Griffin Technology are vying for position here too.

Griffin’s StompBox appears to be a natural progression from its simple GuitarConnect cable and app combo it introduced when the iPhone was still in short trousers. As its name suggests, the StompBox is a pedalboard and yet it relies on GuitarConnect cabling as part of its configuration and uses the same Frontier Design iShred Live app, more on this in a moment.

The four button pedalboard has a durable iOS docking cable and takes its power from the iPad, iPhone or iPod Touch. Apart from its switching circuitry and its four LEDs above each footswitch, the pedalboard is dumb and blind. There’s no display of any kind nor additional controls for tweaking – that’s all done from the app. That said, if you have an expression pedal, there’s a 1/4in jack socket round the back, so you can utilise it as a wah or volume pedal when assigned to a suitable virtual effects unit.

With iShred Live downloaded and the Stompbox plumbed in to your iOS device, all that remains is to get the guitar signal into this arrangement. Rather than plug the guitar into the pedal board, as you might have assumed, the GuitarConnect splitter cable – with it multi-pole 3.5mm jack – functions as an in/out interface. So one end is a 1/4in guitar jack plus a 3.5mm headphone socket, the other is a single 3.5mm plug for the iOS device – I’ll say iPad from now on, as that’s what I tested it on mostly.

So your iPad ends up with a dock cable at one end and an audio splitter at the other. The pedalboard lies on the floor, although the iPad can end up on a table, as the cables are long enough, thankfully. If you’re thinking this sounds a little inelegant, you’re not alone. I used a Griffin Wavestand to prop up the iPad in landscape mode and found that over time the weighty dock connector cable would disconnect as it slowly eased out of the socket. The pedal icon disappears from the bottom of the screen when this happens. You’re also warned when the audio cable isn’t present. 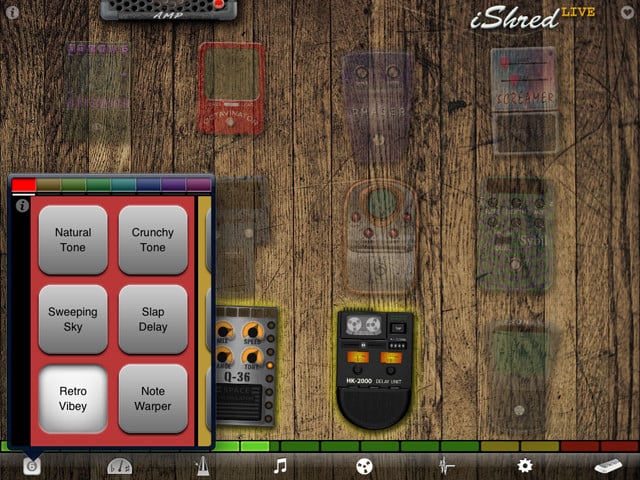 The pedalboard is configured from the iShred Live app and apparently works with JamUp Pro XT too. Indeed, Griffin is pushing this app quite hard as an alternative, with no iShred Live pics showing on its StompBox site. Another StompBox app is Griffin's own Qscript, which has nothing to do with guitars at all, but is a foot controlled speech prompter.

Next page: Stomping at Decca
Page: