Putting intelligence into the aerial

A spinout from Edinburgh University is touting a mobile-phone antenna smart enough to aim at the nearest base station, and small enough to squeeze into the slimmest smartphone.

The technology was developed at Edinburgh University by a trio including one professor and a PhD student, backed with £450,000 from the Scottish Enterprise, who've spent six years getting the technology right and are now looking for someone to license the idea.

The antenna design was spun out unto a company called Sofant back in October last year, with the University remaining a shareholder, but Sofant now has a working prototype which is capable of directing the transmitted signal towards the nearest base station - hugely reducing the power required as well as improving reception.

Making radio signals directional is very helpful, but hard to do when one end of the transmission keeps moving. "Beam forming" is the answer, and very much in vogue at the moment. Wi-Fi access points happily track multiple devices as they move around an office, and satellites can create multiple spot beams from orbit, sometimes even on the same frequency, aimed at the receiving station to increase capacity as well as reducing the required transmission power. 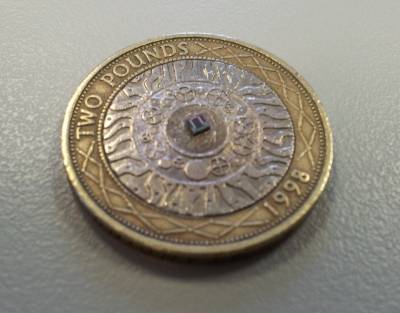 It's small, but is it small enough?

But fitting the same tech into a mobile phone is much harder. Mobile phones aren't isotropic (they don't transmit equally in all directions), as they use antennas designed to avoid radiating up and down (something worth remembering if one is using a headset with the phone resting on a desk), but Sofant takes that much further by actively directing the transmitted signal.

To do that it needs clever software, and a chip upon which to run it – compared to current antennas which are generally printed onto the circuit board. The question, therefore, is if the Sofant design can save more energy than would be supplied by a battery occupying the same space, something phone manufacturers around the world will no doubt be evaluating over the next few months. ®