A team of alien-hunting astroboffins has been awarded a grant to search the sky for immense engineering feats that would reveal the existence of astral civilizations far, far more advanced than us puny humans.

Lead by assistant professor Jason Wright of Penn State's Department of Astronomy & Astrophysics, the team will use NASA's Wide-field Infrared Survey Explorer (WISE) to search the sky for the infrared fingerprints of possible Dyson Spheres, energy-capturing mega-structures named after all-around smart guy Freeman Dyson, who postulated their existence in a 1960 paper.

According to Dyson, any advanced civilization would inevitably use up all of the resources on their planet, and would be forced to look elsewhere for energy. The most obvious place, he surmised, would be the star around which their planet orbits.

To capture that energy, they would construct the aforementioned Spheres – mind-bogglingly immense structures that would surround the star and collect its energy. These structures could be actual spheres, but more likely would take the form of rings, swarms, or banded spherical collections of energy harvesters.

No matter what form they might take, they'd undoubtedly give off infrared radiation that could be detected by such sensitive sensors such as those aboard WISE – and that's where Wright and his team come in.

The Atlantic reports that Wright has been awarded funding from the John Templeton Foundation to conduct his search, in response to his proposal, "Constraining the Abundance of Kardashev Type II and III Civilizations From Large Area Infrared Surveys".

We'll get back to Kardashev's civilization types in a moment. 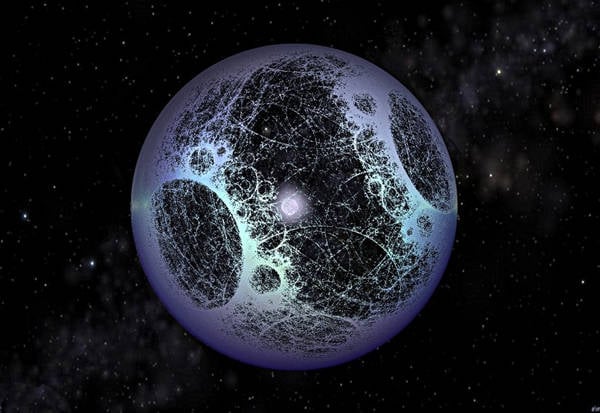 A star-surrounding Dyson Sphere could be solid, swarm-like, or anywhere in between (source: Sentient Developments)

The grant is part of the Templeton Foundations Big Questions program, which funds research into – what else? – "Big Questions of human purpose and ultimate reality." The questions that the Foundation has funded Wright to explore are "Are we alone in the universe? Or, are there other life and intelligence beyond the solar system?"

Dyson Spheres, if found, would most certainly indicate that we are not alone, and that we're far behind other civilizations in our technological prowess.

A search for the Spheres is rather straightforward, if quite subtle due to the vast distribution and distances of possibly habitable planetary systems. As Dyson noted in his 1960 paper raising the possibility of star-enclosing spheres as civilization-extending sites:

... the search for extraterrestrial intelligent beings should not be confined to the neighborhood of visible stars. The most likely habitat for such beings would be a dark object, having a size comparable with the Earth's orbit, and a surface temperature of 200 deg. to 300 deg. K. Such a dark object would be radiating as copiously as the star which is hidden inside it, but the radiation would be in the far infrared, around 10 microns wavelength.

But what type of being could conceivably create such a structure? The answer to that question was suggested in 1964 by Russian astrophysicist Nicolay Kardashev in the Journal of Soviet Astronomy, where he outlined his idea that civilizations could be classified into three types of what have come to be known as Kardachev civilizations.

Other thinkers have said, "Why stop there?" In 2003, for example, Zoltán Galántai of the Budapest University of Technology and Economics suggested a Type IV civilization that could harness the energy of its entire universe. And if the multiverse theory is correct, some civilization with understanding and prowess far beyond what we can even imagine might harness the energy in multiple universes, our understanding of the laws of physics be damned.

Wright and his team, however, are content to search for Dyson Spheres constructed by Type II and Type III civilizations. They won't be looking for solid shells, though, because such structures, Wright told The Atlantic, "would not be mechanically feasible." Instead, he opined, a functional Dawson Sphere "would probably have to be more like a swarm of collectors."

Wright's dismissal of solid-shell structures, however, will miss the Dyson Sphere discovered in 2369 by the U.S.S. Enterprise NCC-1701-D, captained by the intrepid Jean-Luc Picard, that found the remains of the U.S.S. Jenolen, which had crashed on a Dyson Sphere in 2294 in the Star Trek episode, "Relics", with the only survivor being loveable ol' Montgomery Scott.

Star Trek aside, Wright and his team are not the only astroboffins who believe in the possibility of Dyson Spheres and the legitimacy of searching for them. Fermilab has conducted its own search for Dyson Spheres, using data obtained from NASA's Infrared Astronomical Satellite (IRAS), published their results in 2009, and concluded that "at best there are only a few quasi-plausible Dyson sphere signatures" in their data set.

Wright's team, however, will be armed with the WISE satellite, a far more sensitive instrument than the IRAS to which Fermilab was limited.

Fermilab's paper is a good read, especially an entertaining appendix that discusses Dyson Sphere engineering. "The International Space Station weighs 2 × 105 kg so that it is a factor of ten billion trillion smaller than a Jupiter-class Dyson sphere," the paper notes. "In short, a Dyson sphere is a large object!"

Here at The Reg, we'd be thrilled if Wright and his team found evidence of a Dyson Sphere or three in our universe. Doing so, of course, would be only the beginning of a long process of investigation, but it would certainly be a giant step towards answering one of the Templeton Foundation's Big Questions. ®