Commander Bond's previous career as it would be today

Bond on Film Thanks to the books and films we all know a lot about James Bond 007. We also know a little about the group he supposedly belongs to, the "Double-O agents" of "Her Majesty's Secret Service" - the only British secret agents with a licence to kill. But just how realistic is the idea? Does anything like the Double-O section really exist in the secret bureaucracies of the British government? If it does, how would you get a job in it?

The answers might seem at first to be a resounding "not very", "no", and "you can't". Of course it's nowadays no secret that Blighty has a secret service - in fact its official title is the Secret Intelligence Service, SIS ("MI6" was never more than a cover name). Its head is known by the initial "C", not "M" as Ian Fleming would have it, but he is also referred to in official circles as "CSS" - Chief of the Secret Service. And indeed, before it became SIS the organisation was known as the Foreign Section of the Secret Service Bureau among other titles, and was at times known even to insiders simply as "the Secret Service".

So yes, Her Majesty does indeed have a Secret Service. And the Secret Service does have "agents" - but these people don't have a desk at the Vauxhall Cross HQ or in any other government building. An agent is, usually, a human-intelligence source: somebody who gives information to SIS. Given the nature of the information SIS is interested in, agents are typically foreign nationals - anyone from hotel receptionists to businessmen to cabinet ministers - and they are seen as traitors or moles by their own governments.

The SIS spies who handle agents and receive their information are called "intelligence officers". They too bear little resemblance to James Bond. Most of the time when they operate overseas they do so as accredited diplomats assigned to a British embassy or consulate under false identities, largely because this means that they therefore have diplomatic immunity from arrest or prosecution. As it is their job to commit the crime of espionage and incite local citizens to do so, this is very useful to them on occasion. (Of course British intelligence officers have sometimes been agents in their own right - but, sadly, they have tended to be agents of foreign opposition services such as the one-time KGB.)

So far from pistols, chop-socky or irresistible sexual magnetism, a normal SIS officer's primary tools for motivating foreigners to do what he wants are bribery, bullshit and in certain circumstances blackmail. The only Bond-like quality a normal SIS officer will be required to show is the ability to drink heavily and remain functional, as any diplomat must on the embassy cocktail circuit. 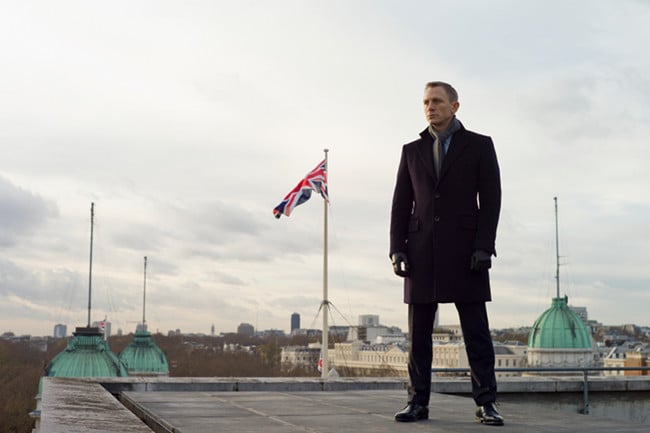 One man, one flag, many paths: Daniel Craig as Bond in Skyfall, Credit: Sony/Eon/MGM

And indeed, service overseas in an SIS "station" inside an embassy will make up only a minority of a normal SIS officer's career. A "station" will often be just one officer, or perhaps three in a capital of some importance to the UK, say Jakarta. Only in a major espionage centre like Vienna or Hong Kong will the station really be worthy of the title, with a big team of spies. For every SIS officer abroad under diplomatic cover there will be two or more back in London pushing paper at Vauxhall Cross.

That's the reality of life in the Secret Service, then. A mainly deskbound career in London, with occasional forays overseas which may amount to little more than a spell as bagman delivering bribe money to corrupt locals (some of whom may well be making up their information, and not even because they have been doubled by local counterintelligence - simply to get more cash from the silly British spies). Indeed, it's rumoured that on various occasions SIS officers have invented fake agents, fabricated bogus reports and simply pocketed the bribe money themselves.

Even in a more serious station located in a hostile country possessing a dangerous counter-intelligence service, if something goes wrong nothing very terrible will happen to the British spy. He will simply display his diplomatic passport and walk away, perhaps to be expelled by the local government later. His career will probably be in trouble if this happens, but unlike James Bond he runs no physical risks and does not live a life of excitement and danger. He is certainly not required to kill anyone, and never carries a weapon.

So it would seem that James Bond is just a myth, and the Double-O section doesn't exist?

No, in fact. If you should finish your education and join the SIS straight away or after an ordinary job of some kind, yes, you will never be James Bond or anything like him - the life as described above of desks, duplicity and fake diplomacy will be yours. (Assuming you even become an intelligence officer: most SIS employees are actually in support roles such as admin, IT, translation and "artworker".)

But James Bond, as we all know, has an armed-services background before he joined the secret service. In his case he is an ex-Commander, a former naval officer, and in the books we read of another Double-O with previous service in the Royal Marine Commandos. In fact, everyone in the armed forces is really a Double-O in a way: every serviceman is not just licenced but required to kill people if his or her mission demands it.

Service skills beyond the ordinary

Ordinary servicemen don't generally acquire Bond's skills, however: particularly the iconic one of being a deadly pistol shot. A pistol is not a commonly-issued weapon in the mainstream armed services, and when a handgun is carried by a uniformed serviceman it is typically because that person is not expected to have to shoot anyone, so it doesn't matter that he or she has been given such an inadequate weapon. For someone wearing a military uniform, the concealability of a pistol is pointless and the only reason it is carried is in case of an unforeseen emergency, most usually as a backup in case one's real weapon - a strike aircraft, maybe - is unavailable.

Other Bond-style skills - unarmed combat, scuba diving, free-fall parachuting, demolitions, evasive and pursuit driving in civilian cars - are also rare in the armed services just as they are in the SIS.

But there is a group in the armed forces where such skills become quite common, namely the Special Forces. One SF formation, the relatively obscure Special Reconnaissance Regiment, is particularly Bond-like in the skills it teaches its operatives: SRR soldiers learn to drive like lunatics, often in cars loaded with Q-Branch-style gadgetry1. They are also intensively trained in fighting with concealable weapons and as such are probably the best combat pistol shots in Britain - and second to none worldwide2. They are also taught to operate undercover in plain clothes, and in various other Bond-like skills such as unobtrusive breaking and entering, the photographing of documents and dirty fighting with bare hands or improvised weapons.

An SRR recruit normally joins the unit from the regular forces, but some are on secondment tours from the other "Tier One"3 special-forces units, the Special Air Service and Special Boat Service. Such men - the SAS and SBS don't recruit women, though the SRR does - may also have acquired most of the rest of James Bond's skill set: explosives expert, frogman, skydiver and so on.

The Special Forces, of course, work for the Ministry of Defence - not the Foreign Office like the SIS. But in fact there is an overlap.

Such things are absolutely not discussed publicly. The SIS, SAS, SBS and SRR are grudgingly acknowledged to exist, but details are not forthcoming and the idea that they have anything to do with each other on a routine basis - that in fact there really is something a bit like a Double-O section - is not discussed.

But we know about it nonetheless, in part from the interesting memoirs of ex-SIS spook Richard Tomlinson, a book titled The Big Breach. SIS spent a long time trying to suppress this, but of course it can easily be downloaded from the internet.

From Tomlinson we learn that while SIS' main task is indeed the running of agents in order to glean secret intelligence, it is also required to be able to mount "Special Operations of a quasi-military nature". SIS' role in these operations is to set the objective and get political clearance to proceed. The Foreign Secretary would be the one who actually had to sign a piece of paper in this case, but actually in reality it would be a rare Secretary who didn't get the Prime Minister involved for any SIS operation which seemed likely to involve British operatives killing people - outside an acknowledged warzone, anyway.

This, then, is James Bond Double-O stuff: quasi-military secret, potentially lethal work on behalf of the Secret Service. And as one might expect, it is not the deskbound mainstream SIS officers who handle such tasks.

Next page: Of course we have a Counter-Terrorism organisation for here at home ... what do you mean, 'what sort of organisation do we have for abroad'?
Page: