LASER STRIKES against US planes on the rise

The next time you find yourself on an airline flight coming in for a landing, consider this: at that very moment, someone on the ground could be training a handheld laser at your aircraft's cockpit.

It happens more often than you think. The FBI has only been keeping records of laser beams striking planes since 2004, but according to a blog post, the number of reports has gone up 1,100 per cent in recent years, from just 283 cases in 2005 to a projected 3,700 cases this year. Unreported incidents could bring the figure even higher.

The problem is twofold, say the Feds. First, laser technology has plummeted in price in recent decades. Low-powered laser pointers can be purchased for as little as $1, yet even these "toys" can have effective ranges of up to two miles. Meanwhile, individuals can now buy industrial lasers with significantly more power online fairly easily.

Second, an individual aiming a laser from the ground often has no real conception of the effect the beam will have on a faraway target. A laser pointer aimed at a nearby wall looks like a small, glowing dot, no more than a centimeter or two in diameter. But the farther laser light travels, the more diffuse it becomes, causing it to illuminate a larger area.

"At 500 feet," says Tim Childs of the Federal Air Marshal Service, "that two-centimeter dot you see on your wall can be six feet wide." That's wide enough to light up an entire cockpit, with an intensity that's comparable to a camera flash. 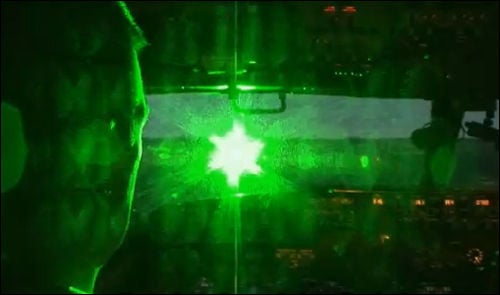 ZAPPED! A handheld laser aimed from the ground can light up an entire cockpit thousands of feet in the air

So what kind of jerk points a laser at a plane anyway? According to the Feds, criminals have been known to aim lasers at aircraft intentionally to throw off airborne surveillance, but those cases are relatively uncommon. Usually, plane-zappers fit one of two profiles: some are minors with no criminal history, while the rest are usually older men with "a reckless disregard for the safety of others."

Although there have been no known incidents of an airplane actually crashing due to a laser strike, the FBI says there have been eye injuries, enough to make the current "epidemic" of laser attacks a serious threat to aviation security.

In 2008, the agency founded the first Laser Strike Working Group National Initiative, aimed at reducing the number of incidents. And under federal law put into effect this year, anyone caught flashing a plane with a laser can be fined up to $11,000 and spend up to five years in prison. That's in addition to an existing law that allows fines of up to $250,000 and prison terms of up to 20 years for interfering with the operation of an aircraft.

"Use a laser pointer for what it's made for. Aiming a laser pointer at an aircraft is dangerous and reckless. Just don’t do it," says supervisory federal air marshal George Johnson.

But what are the chances a laser strike could happen to your next flight? According to figures from the National Air Traffic Controllers Association, roughly 70,000 aircraft take off and land in the US each day, putting the odds of your next flight being zapped by a laser at around 1 in 6,900. ®