Democrat candidate attacked by GOP for being stabby assassin ORC

When Republicans play WoW they're all paladins

US Republicans are completely out of touch with, er, virtual reality - it would seem - after a Maine state senate candidate was outed by Republicans for being a sweary orc badass in the online game World of Warcraft.

Apparently, Colleen Lachowicz' participation and persona in WOW makes her unfit to run for office - in GOP eyes anyway.

The wannabe politician disagrees and has labelled fusty old Republicans as being, well, fusty. In a statement on her website, Lachowicz said:

I think it’s weird that I’m being targeted for playing online games. Apparently I’m in good company since there are 183 million other Americans who also enjoy online games. What’s next? Will I be ostracised for playing Angry Birds or Words with Friends? If so, guilty as charged! 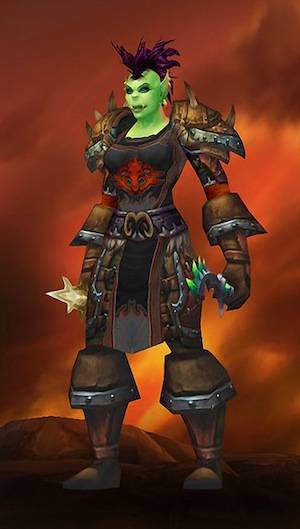 Just another typical day at the office for stabby Colleen

What’s really weird is that the Republicans are going after my hobbies instead of talking about their record while they’ve been running Augusta for the last two years. Instead of talking about what they’re doing for Maine people, they’re making fun of me for playing video games. Did you know that more people over the age of 50 play video games than under the age of 18? As a gamer, I’m in good company with folks like Jodie Foster, Vin Diesel, Mike Myers, and Robin Williams. Maybe it’s the Republican Party that is out of touch.

The Republicans couldn't resist having an opportunistic dig at the green-skinned, Mohican-hair sporting Lachowicz in the online game, who apparently loves to "stab things" having reached level 68 in WOW.

A website - dubbed Colleen's World - has even been created by the GOPs in a clumsy attempt to sully the Democrat candidate's reputation. It reads:

Colleen Lachowicz is a Democrat candidate for Maine State Senate. In Colleen’s online fantasy world, she gets away with crude, vicious and violent comments... Maine needs a State Senator that lives in the real world, not in Colleen’s fantasy world.

Of course, the Republicans might want to look a little more closely in their own backyard if the party thinks that play-acting in an online game has anything whatsoever to do with reality.

One need only look to ex-President Ronald Reagan or erstwhile Governor of California Arnold Schwarzenegger, both of whom have been actors in Hollywood starring as cowboys and killer cyborgs among other things. ®