A pair of UK researchers have surveyed international coverage of climate scepticism, both during the months following the IPCC's 2007 Fourth Assessment Report and during the late-2009 "Climategate" contretemps, and have discovered that among the six countries' publications they examined, the UK and US had by far the most "articles containing sceptical voices."

The survey results are discussed in an article presented in IOPscience's Environmental Research Letters entitled "Cross-national comparison of the presence of climate scepticism in the print media in six countries, 2007–10" by UK researchers James Painter and Teresa Ashe, of the Universities of Oxford and London, respectively.

Painter and Ashe concluded that "news coverage of scepticism is mostly limited to the USA and the UK; that there is a strong correspondence between the political leaning of a newspaper and its willingness to quote or use uncontested sceptical voices in opinion pieces; and that the type of sceptics who question whether global temperatures are warming are almost exclusively found in the US and UK newspapers."

The pair define "climate scepticism" and "climate denial" as "discourse [that] challenges the views of mainstream climate scientists and environmental policy advocates, contending that parts, or all, of the scientific treatment and political interpretation of climate change are unreliable."

As examples of this discourse, Painter and Ashe cite mathemetician and mining consultant Steve McIntyre's Climate Audit and meteorologist Anthony Watts' Watts Up With That? websites, along with three books by UK authors: accountant Andrew Montford's The Hockey Stick Illusion, journalist Christopher Booker's The Real Global Warming Disaster, and former energy secretary and Chancellor of the Exchequer Nigel Lawson's An Appeal to Reason. They also note the seminal climate-scepticism book by the American reporter Ross Gelbspan, The Heat Is On.

The article details the increasing efforts by researchers to determine the patterns of "uncontested scepticism" in the media. One such study, Painter and Ashe report, determined that "of the three main [US] cable channels (CNN, MSNBC and Fox News), Fox was the most likely to be dismissive of climate change science."

The authors also note that although there have been a number of studies of the "organizational links between climate scepticism and conservative think tanks/business communities" that have "resulted in a tendency to view it as a discourse with conservative affinities," those studies' conclusion have not been tested outside the US.

To begin their research on climate scepticism outside the US, Painter and Ashe first defined three type of sceptics:

To survey coverage outside the US, Painter and Ashe chose both a left-leaning and right-leaning newspaper in six countries: the UK, US, France, India, Brazil, and China – although the left-right balance broke down in that last country. "For obvious reasons," they write, "this was not possible in the case of China."

They then combed through these papers for climate coverage during two periods, the first being mid-November 2009 through mid-February 2010, during which the University of East Anglia "Climategate" story broke, the Copenhagen climate summit took place, errors were alleged in the IPPC's Fourth Assessment, the UK's sceptical lobby group the Global Warming Policy Foundation was formed, and there was "a cold winter in many parts of the northern hemisphere." 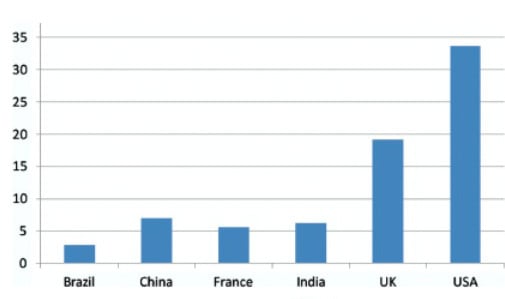 Articles containing sceptical voices as a percentage of the all articles covering climate change or global warming,
mid-November 2009 through mid-February 2010

The second – although earlier – period included the months of February through April 2007, which saw the launch of two IPCC reports. This time frame was chosen, Painter and Ashe write, to provide "a sense of whether climate change stories generally involved the reporting of sceptical voices, even when scepticism was not at the centre of the story." 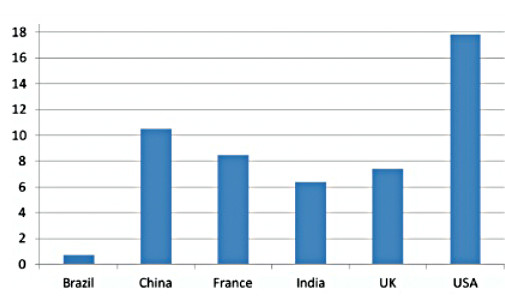 Articles containing sceptical voices as a percentage of the all articles covering climate change or global warming,
February through April 2007

Due to the different sizes of the space each newspaper devoted to news-coverage, Painter and Ashe reasoned, the most accurate way to compare country coverage was to determine the percentage of articles that contained any of the three types of scepticism among all articles found that focused on climate change or global warming.

When the data was reviewed in this way, the US carried a far higher percentage of climate-change articles that contained a sceptical voice than did any other country studied during the 2009-to-2010 period. The UK's percentage was also markedly higher than that of any of the other four countries surveyed – understandable due the regional interest in "Climategate" and the series of what Painter and Ashe characterized as the "in-depth features" in the Guardian written by Fred Pearce and covering that controversy.

Next page: But what about that IPCC report?
Page: