But what about that IPCC report?

Results were different in the 2007 IPCC report period. Fewer articles in total covered climate change, with the US articles again containing the most sceptical voices, but with China taking second place. Painter and Ashe, however, caution that the Chinese percentage is to be taken with a grain of salt due to the low number of climate change articles found in the two sammple newspapers, People's Daily and Beijing Evening News.

"So again," the researchers write, "we can conclude that even in a period when sceptical voices are not the central media story, as they were for 'Climategate', the USA print media included in this sample contained nearly twice as many such voices as the next country, expressed in percentage terms, suggesting that there is a significant difference between the habits of US climate change reporting and the other countries examined."

Also of interest is the fact that the liberal-leaning New York Times ran 14 opinion pieces that included sceptical voices, but all of them also included arguments from non-sceptics. The conservative Wall Street Journal, on the other hand, ran 17 opinion pieces – but "all but one of which was left uncontested," Painter and Ashe report. The WSJ provided not balanced argument, but single-sided certainty.

Finally, the two researchers analyzed the types of sceptical voices as quoted in articles, country by country. "The country variations are notable," they understatedly state, with the US articles far and away more commonly using quotes from Type 1 sceptics – "those who deny the global warming trend" – than do other countries. Painter and Ashe do note, however, that this imbalance is partly due to quotes attributed to US Senator James Inhofe, the author of what can arguably be described as a massively self-aggrandizing book, The Greatest Hoax. 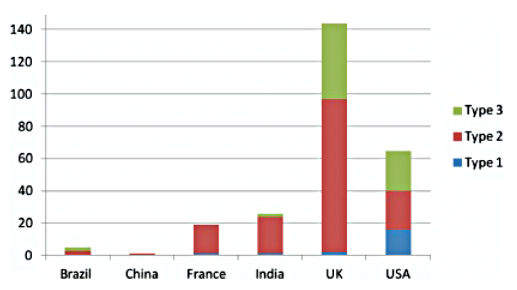 Types of individual sceptics quoted in articles, by country

Also of interest is that Type 3 sceptics – "those who accept human causation" but aren't terribly worried about it, don't think climate models are suffiencient, or believe that climate change requires strong intervention – are essentially absent in France, India, Brazil, and China, but are prevalent in the US and the US.

In addition, the study concluded that the UK has an exceptionally high number of quoted Type 2 skeptics: those who do not concur with the thesis that global warming is anthropogenic.

In Painter and Ashe's conclusion – as is common in research work – the authors call for more study, "including the study of other countries such as Australia, Canada, Norway and Eastern Europe, where climate scepticism is known to be prevalent."

From this Reg reporter's point of view, Painter and Ashe's work indicates a number of things – but I'll stick to three. First, the US and the UK are more adept at thrashing out the climate-change debate in public than are other countries, perhaps due to their traditions of printed, public arguments.

Second, the clear difference between the inclusion of both pro and con arguments in opinion pieces published by liberal US newspapers versus the lack of same in conservative newspapers is a reflection of the soft left's tendency to seek balanced arguments even when the current consensus belief among the large majority of the climate-science community points toward the reality of anthropogenic climate change.

And finally, when the IPCC releases the four volumes of its Fifth Assessment Report, with the first volume scheduled to appear in September 2013 and the fourth in October 2014, the debate will heat up again, many more articles will be published in newspapers around the world, and your humble reporter will have an awful lot of reading to do. ®