This supercomputing board can be yours for $99. Here's how

Scaling up to exascale

The Epiphany design is meant to scale to around 1GHz with 64 cores on a die and deliver performance at around 25 milliwatts per core. This Epiphany-IV chip, which was previewed last October, is currently running at 800MHz and delivers that 50 gigaflops per watt.

"It has the best energy efficiency in the world," brags Olofsson, "even better than the GPUs." Chips came back from the fab – Not Taiwan Semiconductor Manufacturing Corp, but rather the AMD foundry spinout, GlobalFoundries – in July of this year and the processors "are yielding well." 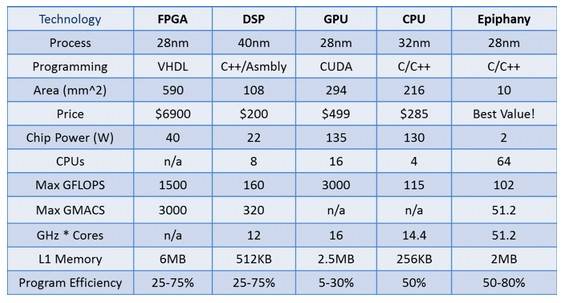 How the Epiphany chip stacks up to FPGAs, CPUs, GPUs, and DSPs

The Epiphany chip runs plain old ANSI C and C++, adheres to IEEE floating point math, and uses OpenCL interfaces to offload parallel processing from a CPU. Nothing crazy or special. When you marry it to an x86 or ARM core, it looks like a math coprocessor. A very tiny one, at only 10 square millimeters without its package on.

Or roughly 1/30th the size of a GPU at 1/30th the floating point performance but running at 1/70th the power of the GPU (as you can see from the table above). The benefit, says Olofsson, is that you can get the programming efficiency of a DSP or CPU with better power efficiency than is provided by a GPU coprocessor.

And that is why Adapteva, which Olofsson funded out of his pocket for the first two years and then in the past two years with $2.35m in debt and Series A equity funding, thinks it can be a player in the race to exascale computing.

Looking ahead, Adapteva has set its sights on two different processors for the exascale timeframe in 2018. One is an entry coprocessor with 1,000 cores on a die that delivers 2 teraflops of performance in a 2 watt thermal envelope, and the other is a massive chip with 64,000 cores with 1MB of SRAM per core that can deliver 100 teraflops of floating point coprocessing at 100 watts. Both chips will deliver 1 teraflops per watt using 7 nanometer wafer baking processes, if all goes well.

Which is where we come into the picture with the Parallella community effort.

Adapteva wants to raise cash to fund development as well as to seed a community of developers for its coprocessors that will in turn feed back inputs into the hardware designs. It isn't quite open source hardware, but it is about as close as you can get.

A Feast for Epiphany

The Kickstarter program that Adapteva has started, which you can participate in here, took a bit longer to get out the door than expected because Kickstarter changed its hardware project rules just before Adapteva was prepped to launch. But it is here, and you can kick in dough for the Epiphany cause - and if you kick in enough dough, you get gear to tool around with.

The first level of support is a Parallella supporter level, where you donate $15 or more, and the funds go directly to development of future Epiphany chips. At the Parallella maker level, you fork over $99 or more and you will get a Parallella board with an Epiphany-III board, which includes a dual-core ARM Cortex-A9 processor, and a software stack to help you code up software for it.

At the Parallella pair level, which has a minimum pledge of $199, you get two of the Parallella boards so you can do compression/decompression, encoding/decoding, transmission/receiving applications without having to borrow someone else's board. The goal is to raise $750,000 in funding at the first level.

If you are eager to get your hands on a 64-core Epiphany-IV chip, and if Adapteva reaches its stretch goal of $3m in pledges, then if you pledge $199 or more at the 64-core level, you will get a single board with the Epiphany-IV.

If Adapteva doesn't reach the $3m level, you'll get two Epiphany boards with the ARM coprocessors. Pony up $499 for developer level and you will get a unique serial number on your Epiphany-III board and you get early access to the Parallella SDK. And cough up $5,000 and you are at the early access level and you get the developer stack three months ahead of everyone else.