This Yoda, no spine has

A deep-ocean research mission along the Mid-Atlantic Ridge has yielded up an oddity: an invertebrate that called to mind the venerable Jedi, Yoda.

Yoda purpurata – that is, purple Yoda – is one of three new species of acorn worm the mission discovered, as reported in the current issue of Invertebrate Biology. 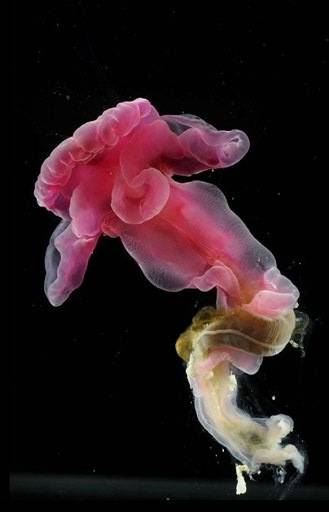 However, the acorn worm probably exceeds the famous eccentricity of the Star Wars character: the features that resemble Yoda’s ears (hence the name) aren’t ears. As noted in this Press Association piece:

Professor Monty Priede, from the University of Aberdeen, said: "Our colleague in California, Nick Holland, the world authority on enteropneusts, chose the name Yoda for the new genus characterised by its large ear-like lips.”

Acorn worms – enteropneusts – are studied because they provide hints at early vertebrate evolution (unless, of course, you take the side of Republican Paul Broun, a member of the House Committee on Science, Space, and Technology, who says that evolution – along with the Big Bang theory and embryology – is a lie from the “pit of hell”).

Priede said the creatures “give an insight into what the lifestyle of our remote ancestors might have been like." Unfortunately, that lifestyle is best-described as “sucking scraps of nourishment out of the sea” rather than than “defeating evil adversaries with a light sabre while mangling English syntax”. ®