Ad giant unearths two more disks down back of sofa 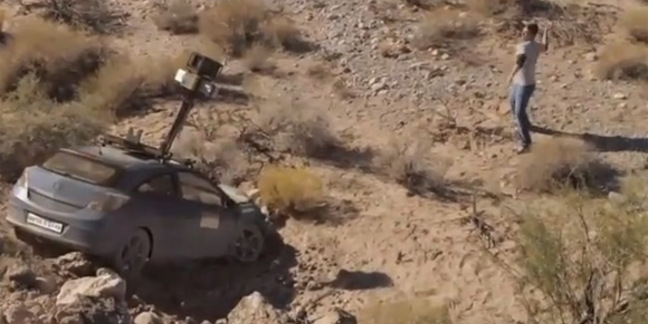 The Australian wing of Google has found yet more disks containing slurped payload data - including emails and passwords - its Street View spycars gobbled from unencrypted Wi-Fi networks across the globe.

The advertising giant wrote to the Office of the Australian Information Commissioner on Monday confessing that it had unearthed two more disks that had collected the data.

Google Inc. has now completed our comprehensive review of our Street View disk inventory. We can advise that the final stage of this process identified two additional Street View vehicle disks that were used for the collection of data in Australia during the time that Wi-Fi data collection was ongoing. Both disks have always been securely housed in our quarantine cages, but our systems were not able to recognise them as Australian. We apologise for this error.

The company added that one of the disks had been "used exclusively" in Australia. It asked the commissioner to grant Google permission to wipe the contents of that disk.

It admitted that the other disk had been used in Oz and New Zealand, which means it will have to additionally seek approval from the Kiwi privacy commissioner before the contents on that particular disk can be deleted.

Google ended its letter by saying: "We do not expect to identify any other Australian disks."

In June this year, The Register was first to reveal that the UK's Information Commissioner's Office - which had previously been labelled as lily-livered for its handling of Google's Street View payload data slurp - had reopened its investigation of Mountain View's controversial technology.

The regulator sent an aggressive letter to senior Google veep Alan Eustace demanding "prompt" answers to seven questions to explain why Street View was able to slurp such data. The missive followed the US Federal Communications Commission's findings that it seemed "likely that such information was deliberately captured" by the fleet of vehicles in the UK.

It was first uncovered in 2010 that Street View's camera-fitted roving motors had not just taken photographs of street scenes for Google's map service, but also collected data including emails and passwords from unencrypted wireless networks they encountered for four years from 2006 onwards. At that point, privacy watchdogs around the world have opened, closed and reopened probes into the company's data-handling whoopsie with varying results that have included total withdrawal and a measly fine. ®

A pairing problem makes an account compromise possible, although improbable

'Fast Pair' works on Androids and some audio devices, Google wants it in your car too