Chubby control freak now with more to grab hold of

VMworld Europe VMware's vCloud Suite is not even two months old and just started shipping a month ago - yet the virtualisation titan is already stuffing more wares into its cloudy tool suite, which does not have the vRAM memory tax but rather simple per-socket pricing.

At the VMworld Europe shindig in Barcelona, Spain today, the updated vCloud Suite will be the main attraction.

VMware rolled out its integrated cloudy control freak alongside of the new ESXi server virtualization hypervisor and vSphere add-ons at the VMworld 2012 extravaganza at the end of August, and it started shipping to customers on 11 September.

Prior to this bundling, you had to buy each of these bits separately, and they used a mix of processor socket or VM pricing with supplemental fees for virtual memory usage above a certain limit. But with vCloud Suite 5.1, you get the whole enchilada and you pay $4,995 per socket for the Standard Edition (which includes vSphere Enterprise Plus, vCloud Director, vCloud Connector, and vCloud Networking and Security Standard Edition, which includes software-defined networking and vShield security).

Depending on how many VMs you have and what features you add, the effective discount for the suite over the piece parts is on the order of 20 to 50 per cent, VMware told El Reg back in August.

With today's vCloud Suite update, the pricing is the same and now new features are being rolled in. The cloudy control freak is getting pretty chubby, as you can see: 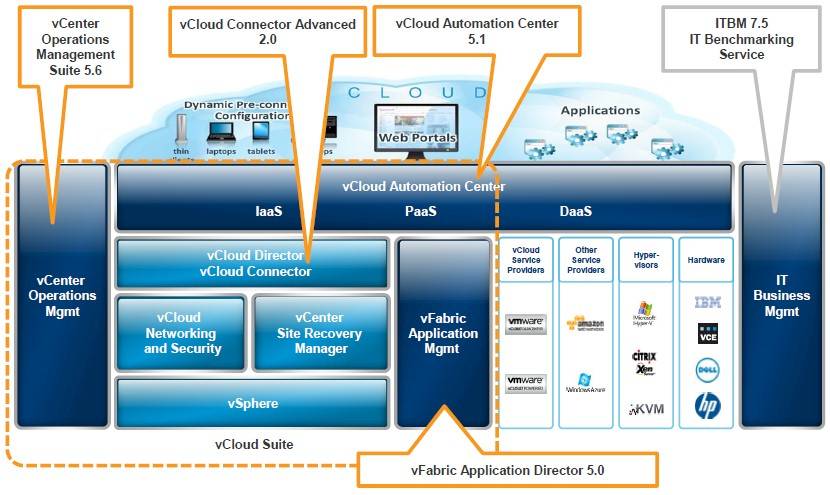 Having eaten DynamicOps back in early July and snatched it out of a possible acquisition by software-starved Dell, VMware is now slapping a new brand on this cross-platform server, hypervisor, and cloud provisioning tool – vCloud Automation Center 5.1 – and rolling it in the vCloud Suite for free.

If you like DynamicOps, you can still buy it separately, but VMware's pricing was not available for the standalone version as El Reg went to press. What we can tell you is that the DynamicOps tools have been integrated with vCloud Director and vCenter Orchestrator (although, really, in many ways, DynamicOps replaces some of the functionality).

The upshot, explained Ramin Sayar, vice-president of virtualization and cloud management at VMware, is that any existing as well as new "virtual data centers", which is VMwarespeak for a pool of VMs under control of its cloudy tools, can now have policy-based provisioning added to them. vCloud Orchestrator hooks into the renamed DynamicOps code and can now tell DynamicOps to provision Hyper-V hypervisors through Systems Center or XenServer directly as well as EC2 compute and S3 storage clouds through AWS cloud APIs.

This gives VMware the ability to manage non-ESXi clouds, which is why the company beat Dell to the punch with DynamicOps.

vFabric Application Director is revved to the 5.0 release level as part of the announcements today, and its application deployment blueprints can now be used for Microsoft packaged applications such as SQL Server, Exchange Server, and SharePoint; custom applications coded in Java, .NET, and Ruby on Rails were already supported.

vCenter Operations Management Suite is bumped up to the 5.6 release level as well, and Sayar says that this product is "one of the fastest growing product lines at the company".

vCenter Operations Management Suite is an analytics tool that watches what is going on inside of vSphere and vCloud stacks (including ESXi-based public clouds) and helps admins figure out what the heck is going on. With the 5.6 release, support for Amazon's AWS cloud is added and support for monitoring physical hosts (which you still need to do) is improved, according to Sayar.

But the most important aspect of Operations Management Suite is a subtle one in that it helps "manage risk in terms of compliance, not just capacity and performance", as Sayar puts it. "You want to know that a workload you deploy is done so in a way that is safe based on best practices. And if risk goes up and performance goes down, you know you have a real big problem."

The updated vFabric Application Director and vCenter Operations Management Suite are both available as standalone products.

That leaves IT Business Management Suite 7.5, an update to the stack of performance anxiety tools that VMware got when it ate Digital Fuel. ITBM is a set of Java-based tools that has a cost allocation engine to allow bean counters and system admins to do "what-if" analysis on their cloudy infrastructure to see how changes they might be thinking about making will not only affect IT operations, but the IT budget itself.

With the 7.5 update, ITBM has a new benchmarking module that has more than 3,500 metrics across 18 different industry domains so IT shops can compare how they are doing compared to their peers and those outside of their field.

By the way, the Digital Fuel wares are not part of vCloud Suite, so you have to buy them separately. ®