Microsoft has revealed the guidelines it gives its own developers to help them decide when users need a rude reminder to stop putting themselves at risk of security problems.

Redmond's rules boil down to being neat and spruce, but the two adjectives are acronyms rather than items in a dress code. NEAT stands for the following

SPRUCE's tenets are visible in the graphic below, which is one of two helpful mini-posters Microsoft has made available (PDF) for you to print and pin into your cubicle. 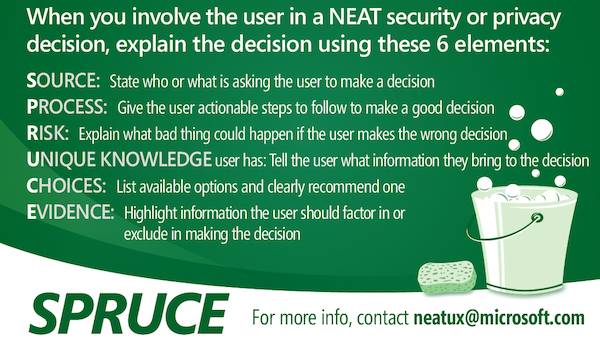 Both NEAT and SPRUCE are also explained in detail in a document (DOCX) that explains both in detail, and also outlines the thinking behind their creation.

Among those thoughts is the revelation that Microsoft convened a committee to cook up guidelines on when to inform users about security issues. That effort, the document explains, “... produced a paper that captured a consensus view of the most important aspects of knowledge [and] … consisted of 24 pages, with 68 items of advice arranged into a hierarchy 3 levels deep.”

Redmond's boffins quickly realised this was impractical, because:

NEAT and SPRUCE are therefore watered-down versions of the best practices Microsoft's security and UI thinkers put into the topic, rather than the source material.

The document says, however, that the simplified guidance on offer has proved powerful, with the mnemonics NEAT and SPRUCE representing “a great first step in helping engineers deliver more usable security.” ®