Just about all Intel Inside and all done with homegrown CPUs

Unisys has been on a quest to get out of designing processors for its ClearPath mainframes and porting its MCP and OS 2200 operating systems from its respective Libra (Burroughs) and Dorado (Sperry-Univac) machines to Intel's Xeon processors for almost as long as Intel has been serious about the server racket. And, with the launch of new Libra and Dorado machines that are as capable as current homegrown CMOS mainframe engines, that job is now, a decade and a half later, nearly done.

The new architecture of the high-end ClearPath Intel-based machines is a bit of a blast from the past for Bill Maclean, vice president of ClearPath programs within the technology, consulting, and integrations solutions group at Unisys.

In the old days, Maclean tells El Reg, a mainframe had three distinct types of processing subsystems – for processing, memory management, and I/O management – that were designed separately and usually upgraded independently from each other as workloads and bottlenecks shifted around. Sperry and Burroughs made their own machines, but when they merged to become Unisys in the fall of 1986, the path towards convergence was laid and many components in the respective machines were converged.

With the ClearPath line, launched in 1995, Unisys crammed Sperry and Burroughs engines under the same skins and also allowed customers to put x86 engines inside the boxes, sharing networks and storage, running either Windows NT or UnixWare. In 1998, the company ditched UnixWare and ran with Windows NT solely, and was eventually dragged kicking into supporting Linux on the Xeon side of the ClearPath machines.

Unisys resells Dell PowerEdge gear as its ES7000 line and is also a Vblock reseller, and is also using what looks like Dell iron as the basis of its Intel-only ClearPath mainframes. 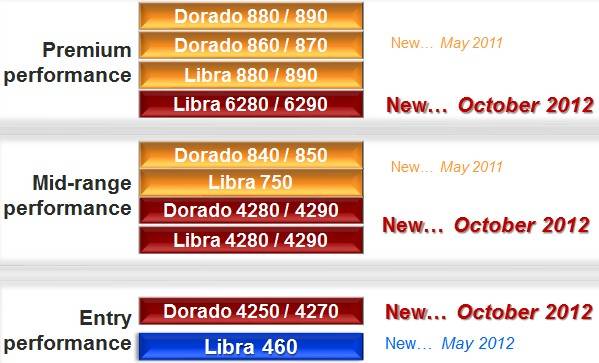 In the table above, the machines in gold are very likely going to be the last machines launched that use native CMOS engines designed by Unisys, since the Libra 4200 and 6200 and Dorado 4200 machines based on Intel Xeons are as fast or faster than those Libra and Dorado 8XX boxes shown in the table.

Unisys will sell these 8XX machines for a few years more, since they offer moderately better performance on batch jobs than the Xeon-based machines today. But in a few years, says Maclean, the Xeon engines will be powerful enough that Unisys will no longer need to sell its own engines (which are made by IBM Microelectronics) anymore. So sooner or later, the red and blue Intel-based machines will take over the gold on that chart.

With these latest ClearPath 42XX and 62XX machines, the blast from the past is that to scale up both processing and I/O and to provide resiliency, Unisys is ganging up multiple two-socket Xeon E5-2600 servers, using some as CPU and memory nodes and others as I/O processing nodes. These nodes are linked together by quad-data rate (40Gb/sec) InfiniBand interconnects, which act as a system backplane for the nodes. 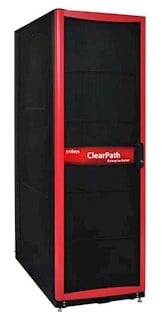 The genius of what Unisys has done is that it has created layers of virtualization and hardware emulation for the OS 2200 and MCP platforms that let it run binary code, unmodified and unrecompiled, that is moved from its own mainframe engines over the Xeon engines.

This technology alone is worth something, and it is the best reason I can think of why Hewlett-Packard should buy Unisys tomorrow. If a company was ever in need of emulation technology, it is HP, which would be wise to try to preserve its HP-UX, OpenVMS, and NonStop platforms (much as Apple did with MacOS when it moved off Power to Intel chips) rather than let Windows and Linux on ProLiant and Integrity machines.

Unisys has never forgotten that the software is the sticky and valuable part. HP has been watching Dell too much and coveting IBM even more. The industry needs HP to compete with technology as much as price and supply chain.

Unisys already revved up the entry ClearPath machines running MCP with the Libra 460 back in June, and the OS 2200 side of the Unisys house is getting two new entry machines, called the Dorado 4250 and 4270.

The server module has 128GB of main memory, six 146GB disks, and between 10 and 16 communication ports. This unit is using the eight-core Xeon E5-2690 processor. A separate specialty engine unit, which can be lashed to the machine to accelerate Java or middleware workloads, is based on a two-socket server module using eight-core E5-2680 processors running at 2.7GHz with 96GB of memory.

With the magic of the golden screwdriver, Unisys can transform this Dorado machinery into the midrange 4280 and 4290, which are machines with considerably more MIPS to bear and have perpetual or utility pricing, respectively. The Dorado 4280 scales from 50 to 2,300 MIPS, and the 4290 scales from 30 to 1,610 MIPS with a 2,300 ceiling. It is the same exact iron.

The Dorado 4200 series is shipping now and supports OS 2200 13.1, which shipped in late February, as well as the prior release. Pricing starts at $325,000, including the full system software stack.

On the Libra side, the midrange is getting a refresh with Xeon E5-based 4200 series boxes and the high end with 6200 boxes.

The processor modules are exactly the same two-socket Xeon E5 servers as used in the Dorado 4200 series, with the same 128GB of memory, and so are the I/O modules. The difference is that the peak single-thread MIPS rating for these engines is 350 MIPS instead of 300 MIPS for the Dorado boxes.

The utility-priced Libra 6290 ranges from 30 to 2,940 MIPS, with that emergency 4,200 MIPS peak. The system has an aggregate of 192GB of main across its four Xeon E5 processor sockets, and sports four 146GB disks for systems software.

For I/O intensive workloads – and that is the case for a lot of mainframe shops – this extra IOPS is a lot more important than the extra MIPS. That said, Libra 500 customers sitting there with engines with 375 MIPS of single-thread oomph are probably looking for more CPU capacity as well as I/O.

Unisys is supporting 8GB/sec Fibre Channel adapters on these new Intel mainframes today, and will move to 16Gb/sec FC adapters next year, according to Maclean.