HP has taken the very unusual step of issuing commentary on IDC's latest PC sales data, which says the PC market is now nearly a tie between HP and Lenovo.

That assessment is in marked contrast to Gartner's most recent effort on the same topic, which has Lenovo at number one.

The news was especially grim for HP and Dell, which as the table below shows took rather nasty hits.

Gartner's data for the same period also paints a picture of a product in decline, but finds Lenovo at number one. Here's Gartner's numbers.

Note: Data includes desk-based PCs and mobile PCs, including mini-notebooks but not media tablets such as the iPad.
Source: Gartner (October 2012)

HP's response to Gartner ranking it Number 2 came swiftly, in the form of a press release that stated:

“While there are a variety of PC share reports in the market, some don’t measure the market in its entirety. The IDC analysis includes the very important workstation segment and therefore is more comprehensive.  In that IDC report, HP occupies the No. 1 position in PCs.”

We'll leave it to readers to decide just why HP felt it necessary to point out that if you prefer IDC's analysis of the market it remains the number one vendor.

Wherever the giant sits on the PC ladder, IDC makes it clear the whole market is in a mess, with senior research analyst for the Worldwide PC Tracker Jay Chou saying “PCs are going through a severe slump.”

“The industry had already weathered a rough second quarter, and now the third quarter was even worse,” Chou said, adding that “A weak global economy as well as questions about PC market saturation and delayed replacement cycles are certainly a factor, but the hard question of what is the 'it' product for PCs remain unanswered. While ultrabook prices have come down a little, there are still some significant challenges that will greet Windows 8 in the coming quarter." 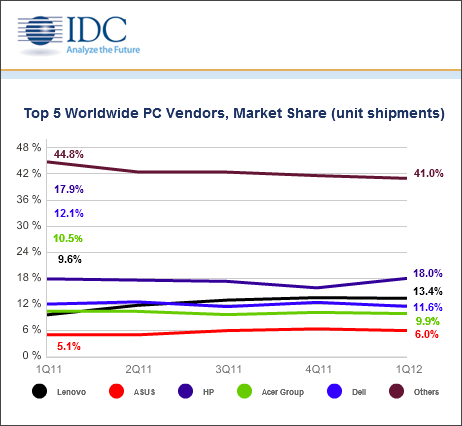 New products and Windows 8, said David Daoud, research director, Personal Computing at IDC, mean a “potential return to positive growth at the end of this year.”

But there are still plenty of storm clouds on the horizon. IDC says it expected a slower quarter, thanks in part to Windows 8 deferring some purchases. But it also found that back-to-school PC sales promotions did not work as well as in previous years.

Chinese PC sales did not meet expectations, partly as a result of what IDC called “competing device distractions”. US sales were also flat, as “The consumer segment was particularly affected as buyers focused on competing products.” Europe's economic woes aren't helping PC sales.

Windows 8 is predicted to be a catalyst for improved sales, with Acer expected to do well with its range of tablets “if Windows 8 finds solid acceptance.”

"The third quarter was also a transitional quarter before Microsoft's Windows 8 operating system release," he said, " so shipments were less vigorous as vendors and their channel partners liquidated inventory. ®