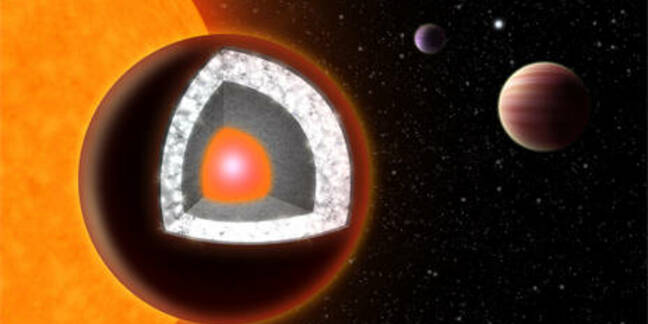 Astronomy has turned up a second diamond planet, and it’s a relative neighbor to the solar system – a mere 40 light-years distant, circling 55 Cancri.

Unlike the diamond planet discovered by Australian astronomers last year, this one didn’t even need a pulsar’s gravity to give it the squeeze. It inherited its mostly-carbon composition from its host star. 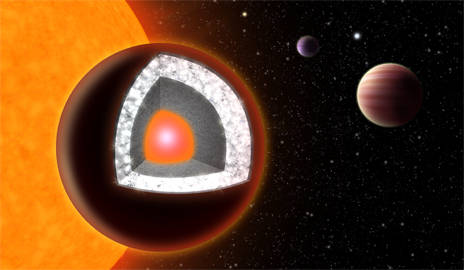 Designated 55 Cancri e, with a radius twice Earth’s and eight times the mass, screams around its star in just 18 hours, and the Yale researchers that discovered it estimate its temperature at 3,900°F (about 2,150&degC).

“This is our first glimpse of a rocky world with a fundamentally different chemistry from Earth,” said lead researcher Nikku Madhusudhan, a Yale postdoctoral researcher in physics and astronomy (emphasis added). “The surface of this planet is likely covered in graphite and diamond rather than water and granite.”

The planet was first spotted transiting 55 Cancri last year, providing an estimate of its radius. That, combined with estimates of its mass, allowed the Yale team to estimate the planet’s chemical composition and come up with the hypothesis that it’s mostly carbon, existing as graphite and diamond, along with iron, silicon carbide and some silicates. They estimate that as much as one-third of 55 Cancri e’s mass could be diamond.

The 55 Cancri system is one of the most populous known to astronomy, with at least five planets orbiting it. As El Reg reported back in 2007, one of those planets may be close to the zone where water could exist. 55 Cancri e is the nearest planet to the host, and was first discovered in 2004.

Yale’s research is to be published in Astrophysics Journal Letters. ®