South Korea on top of the IT world

South Korea has once again been named the world’s most advanced ICT economy according to the latest annual study from the International Telecommunications Union, which had good news for the UK too as it crept up into the top ten.

The ITU’s Measuring the Information Society 2012 report is intended to provide a snapshot of global tech development and point out which countries need to try harder. Page 21 includes a full list of countries including last year's ranking for comparison.

It rates countries according to an ‘ICT Development Index’ (IDI) which benchmarks against 11 indicators including IT access and skills, mobile phone subscriptions, internet users, literacy rates and broadband subscriptions.

Unsurprisingly, IDI values for developed nations were on average double those in the developing world with the only new entrant in the top ten this year the UK, which jumped up from 14th to 9th place, the ITU said.

Europe dominated the top ten, with eight countries including several Nordic nations and Iceland, while Japan crept in at number eight.

Korea was singled out for praise thanks to high mobile and fixed broadband penetration rates, a large online population (84 per cent), and excellent education and literacy.

The report added the following:

The country has made ICT development a policy priority and integrated its use in many aspects of society. The Korea Communications Commission continuously works towards transforming the country into a “smart powerhouse” by effectively regulating a highly dynamic and competitive telecommunication market and pushing forward innovations and improvements, such as the deployment of LTE in 2011.

Elsewhere, the US jumped up a notch from 16th to 15th - helped by strong growth in the number of mobile phone subscribers and internet-connected households - while Australia remained in 21st position.

Although so-called developing nations still have some way to go in their ICT development, they accounted for the most dynamic markets in the mobile sector, driven by China and India, the report said.

Prices for telecoms and internet services are also dropping – by 30 per cent globally between 2008 and 2011, with the biggest decrease in the fixed-broadband space, where average prices have come down by 75 per cent.

However, the ITU warned that fixed broadband remained too costly in developing countries – a basic, monthly package representing over 40 per cent of monthly gross national income (GNI) per capita.

In this area, mobile broadband was highlighted as a potentially less costly way to boost internet use.

The ITU has also highlighted this year's big movers on its IDI scale, in the graph reproduced below. This index ® 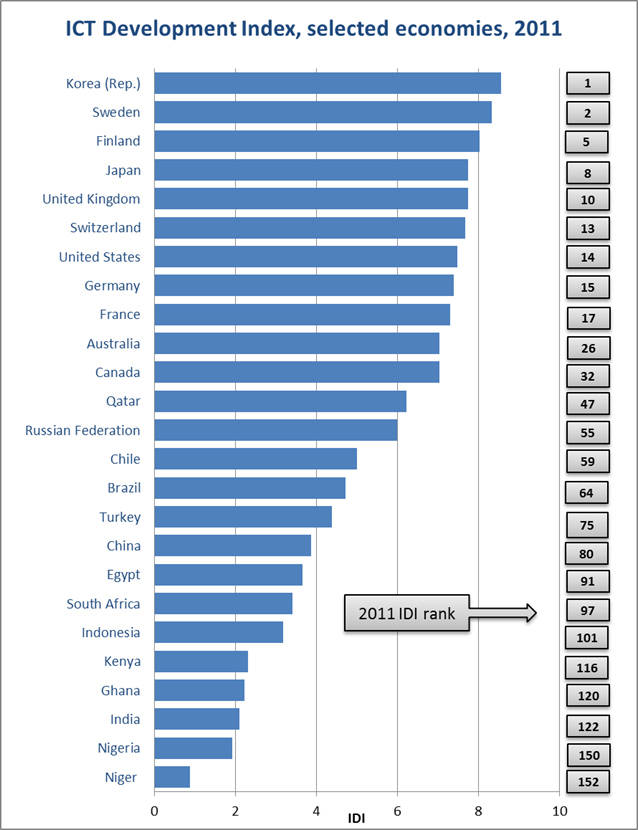