The British government has unleashed a legal threat against a website hosted in the US that is currently displaying the names, home addresses and personal telephone numbers of MPs, farmers and others who are said to be in support of the controversial UK badger cull.

The Register spoke with a man going only by the name "Jay", who is campaigning against the government's plan to kill thousands of badgers because, experts claim, the animals spread tuberculosis among cattle.

Jay runs the Coalition of Badger Action Groups and is also the contact behind the Badger-Killers.co.uk website, which had carried personal details of persons deemed to be badger cull supporters including politicians, farmers and professors.

The UK's Department for Environment, Food and Rural Affairs (Defra) served an injunction against the site and was successful in demanding the removal of personal information published online.

However, this being the interwebs, a mirror image of the website quickly sprouted up (Badger-Killers.com) and then almost immediately began - according to Jay - to garner more private details about individuals linked to the pro-badger cull campaign in Blighty.

US-based hosting firm Nearly Free Speech (NFS) has vowed to continue to let its unnamed customer publish the information even though it was recently served with a letter from Defra's lawyers (PDF).

The company has already dismissed what it sees as the UK government's attempt to censor its customer. NFS's president Jeff Wheelhouse said in a missive [PDF] to the Treasury Solicitor’s Department:

We are aware of no such law against publishing the contact details of government ofﬁcials in our country. Our president, for example, lives at 1600 Pennsylvania Avenue in Washington DC, and our citizenry does contact him at that address on a daily basis on a broad spectrum of matters of concern to them. That’s merely one example that I happen to know off the top of my head. In fact, it is quite routine for the home addresses people in our country, government ofﬁcial or otherwise - including mine - to be a matter of public record.

Wheelhouse added that he was ready to take on the British government in a US court, if necessary, and seems to have concluded that Defra's demand did not stand up to scrutiny. He said:

The crux of that threat, however, is not the part about putting us at risk, or significant costs, or even enforcement actions. The crux is that you recognise that you can make no persuasive argument and bring no viable case, and thus resort to threats. You want us to choose to censor our customer’s website content? No.

WHOIS records show that the identity of the registrar of Badger-Killers.com remains a secret. However, the .co.uk version lists Debbie Vincent as its owner. She first registered the site in 1999, but is apparently no longer associated with it.

Meanwhile, supporters of the cull in the UK have claimed that the animal rights protestors were guilty of harassment and intimidation and have added that the website now hosted by NFS simply amplified the possibility of abuse of those calling on badgers to be shot in a move to help stamp out bovine TB. 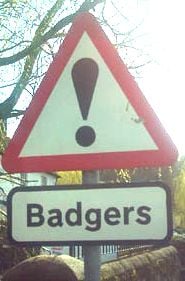 The National Farmers Union's president Peter Kendell said last week that he wanted to "put the record straight" about the organisation being in favour of shooting badgers in parts of the countryside.

To the animal rights protestors who are intent on intimidating and harassing people who are simply trying to run their businesses and look after their families I would say your tactics are not working. Your campaign is based on misinformation, scaremongering and bullying with no scientific basis.

And to the general public, I say look at the science yourself before making up your mind. Find out for yourself the impact that TB is having on the welfare of British cattle and ask which other countries have managed to get on top of TB without controlling wildlife.

For those in any doubt, this policy has been through two rigorous public consultations. It has also been upheld after challenges in both the High Court and the Court of Appeal. The policy is backed by scientists, vets and government who all agree that this is the best way of controlling the spread of this awful disease throughout the country.

Jay is one such animal rights protestor. We were able to make contact with him quite easily, even though he insisted on keeping his identity anonymous as a, in his words, "fuck you" to the government. He said that he was aware of cases where cull supporters' email accounts had been flooded with spam.

He told us: "If you're an organisation in support of a cull on badgers - who are one of the most loved creatures in this country - don't be surprised if people start clogging up your email."

Jay claimed that a mirrored version of his site "popped up within 10 or 15 minutes" of the personal contact details that were originally posted on Badger-Killers.co.uk being removed, which happened two days after Defra served an injunction on the site.

It was difficult to pin down the main thrust of Jay's argument against the badger cull beyond him explaining that he wanted "to expose the secrecy behind it".

He told us that he considered harassment to be "bad" and said that he didn't want his campaign to be seen as one that was against farmers. He claimed that some farmers were concerned about the impact on businesses any badger cull might have locally.

Jay also claimed to be operating lawfully and said he was taking direct action by, for example, using a horn to warn badgers when a cull is about to take place.

He failed, when questioned, to see any hypocrisy in keeping his own identity secret while exposing the home addresses and telephone numbers of supposed badger cull supporters. Might his campaign be weakened, we asked, by his refusal to reveal his real name?

In justifying the publication of the personal details of MPs and others, Jay said the information had been incredibly easy to find online.

"It took about 20 minutes of Googling to find the information," he said.

The Reg asked Defra to comment on this story. However, it declined to offer up any details of cases where individuals had been threatened or intimidated by anti-badger cull campaigners. A spokeswoman at the government department said it couldn't comment "on any aspect of security".

Beyond that, Defra gave us the same statement it has been issuing to journalists since September when the list of names and numbers first appeared on the Badger-Killers.co.uk website. It said:

We respect the right of people who disagree with the government's policy on badger culling to make their views known through legitimate channels such as through the courts, responding to consultations and by writing to ministers. However, any organised campaign of intimidation of public figures, their families and their employees is unacceptable.

At time of writing, the list of cull supporters is still available online via the US-hosted version of the Badger-Killers site. ®

Further reading: Scientists, a Beeb Q&A, Brian May and the world's most famous badgers.