One company bucks the trend big-time. Wanna guess which one?

Global notebook shipments took it on the chin in the third quarter of this year, with Acer, Asustek, and Toshiba seeing sales plunge by 15 to 25 per cent when compared to the previous quarter.

One notebook vendor, however, bucked the trend, with sales of its notebooks climbing nearly 30 per cent during the same period. Care to hazard a guess as to which company that might be? Yup, Apple, which updated its MacBook Pro and MacBook Air offerings in June to generally favorable reviews.

Despite Cupertino's success, the entire notebook market was down 4.5 per cent quarter-to-quarter, and a full 11.6 per cent year-on-year, according to the study by the market-watchers at Digitimes Research. 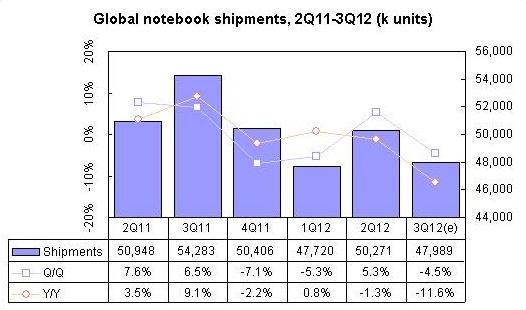 Think how bad notebook sales might have been had Apple not refreshed its lineup (source: Digitimes Research)

Asustek also suffered the indignity of watching its fourth-place global ranking in the second quarter drop to fifth in the third quarter – a quarter, by the way, which often sees strong notebook sales due to back-to-school purchases.

Digitimes Research blames the global notebook sales decline on – what else? – that pesky economic downturn, along with retail-inventory adjustments and customers postponing notebook purchases until after Windows 8 goes on sale on October 26.

The Windows 8 roll-out, of course, was not a factor in the soaring sales of Apple's MacBook Pro and MacBook Air notebooks – would that Linux-laptop lovers could have such a pronounced affect upon the notebook market. ®