If you found last month to be a mite toasty, the data is now in: you were right.

"The average combined global land and ocean surface temperature for September 2012 tied with 2005 as the warmest September on record, at 0.67°C (1.21°F) above the 20th century average of 15.6°C (60.1°F)," reports the National Climatic Data Center (NCDC), a division of the US National Oceanic and Atmospheric Association (NOAA).

The "on record" to which the report refers, by the way, goes rather far back: 1880. Actually, their data set goes back to 1854, but as they rather rationally explain, "Due to very sparse data, no global averages are computed before 1880. With more observations after 1880, the signal is stronger and more consistent over time."

And yes, climate-change skeptics, temperature monitoring and assessment techniques have indeed come a long way since James Garfield defeated Winfield Hancock in the US presidential election and Cologne Cathedral was finally finished after a 632-year construction project – but we'll trust the NCDC to have made the appropriate adjustments.

You don't have to, of course – there are plenty of theories you can rely upon to diss the NCDC's findings, from semigloss latex paint on thermometer shelters to the exhaust fans of air conditioning units. Knock yourself out. 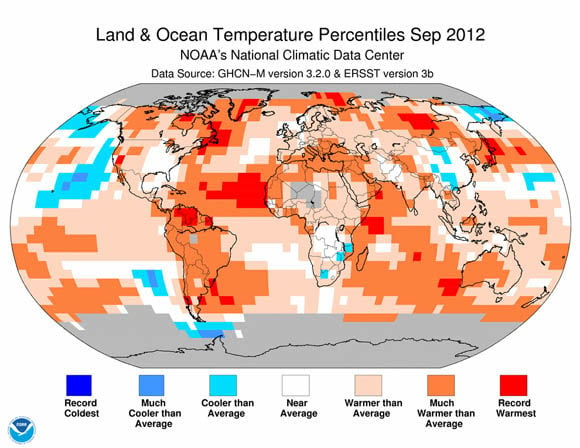 If you live in the UK, September temperatures were pretty much normal. In Arizona? Not so much... (click to enlarge)

While you're working on that, we'll simply report that the NCDC's most recent findings come one month after it noted that "The globally-averaged land surface temperature for June–August 2012 was the all-time warmest June–August on record, at 1.03°C (1.85°F) above average." 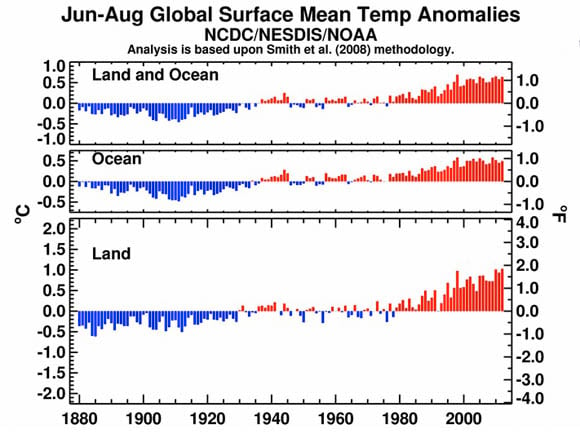 If, by the way, you are one of the many loyal Reg readers who, when you see a report such as the NCDC's and conclude that said organization is merely trying to scare folks into providing more funding, know that you have a friend in high places here in the States: the chairman of the US House of Representatives' Committee on Science, Space, and Technology, Congressman Ralph Hall (R-TX).

Late last year, when a reporter pointed out to Hall that 97 per cent of the 1,372 climate researchers polled by the Proceedings of the National Academy of Sciences agreed that human activities contribute to global warming, Hall replied, "And they each get $5,000 for every report like that they give out. I don't have any proof of that. But I don't believe 'em."

Hall is a climate skeptic, he explains, because – at least in part – "I don't think we can control what God controls."

God and the top dog of the US House of Representatives' key science-policy committee – the scientists and statisticians at the NCDC certainly have some powerful forces with which to contend. ®