Watchdog: Gov bods should rummage through BINS for FOI data 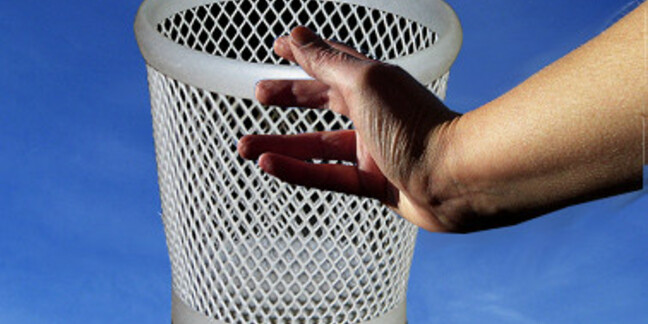 Public sector bodies will generally be required to disclose information even if it is stored in computer 'recycle bins', the Information Commissioner's Office (ICO) has said. The watchdog has issued new guidance (25-page/350KB PDF) to help public bodies which are subject to the UK freedom of information (FOI) or environmental information laws to determine whether they hold information that should be disclosed when requested.

Under UK FOI laws and the Environmental Information Regulations (EIR) individuals have a right to ask for and, generally, be provided with certain information held by government departments and public bodies.

If information is deleted from a computer recycle bin unintentionally, however, public bodies could still have to disclose it under FOI or EIR, the watchdog said.

The ICO said that it "recognises" that its view differs from that taken in a ruling by the Information Rights Tribunal in 2005. It said that deciding whether public bodies hold deleted information should be determined by public authority's intentions, and not on the "practicalities of restoring the information".

The ICO said that, generally, public bodies will not be said to hold information that is subject to disclosure under the FOI or EIR regimes if it is merely stored on "backup" systems. This, it admitted, contrasts with the view of the Lord Chancellor in his code of practice issued to public bodies, under the terms of the FOI Act, on the management of records.

"There are, as always, exceptions. Where data has been lost from the main computer and the public authority intends to use the backup to restore that data, the Commissioner considers that the information is held. There have also been situations where, in the absence of a proper records management policy, the backup has been used for all intents and purposes as an archive," it added.

In its guidance the ICO also said that 'metadata' and "style settings" associated with documents will only be disclosable under FOI or EIR if the information is specifically requested. The watchdog described metadata as "information on the properties of electronic documents" that includes details about the "author, dates, editing history, size, file paths, security settings and any email routing history".

The ICO said that it will determine "on the balance of probabilities" whether public bodies hold information but have not disclosed it when they ought to have under the FOI and EIR regime. It said it would "consider the scope, quality, thoroughness and results of the searches" that public sector bodies conducted for the information requested, and/or any "other explanations offered as to why the information is not held".

If public authorities can show that there was not a "business need" for them to store information that is sought under the FOI or EIR laws, then the ICO may be "persuaded that no information is held," it said.

The ICO's guidance also outlined that in circumstances where public bodies are asked to provide "lists or schedules" of information that they have not themselves compiled, they could still be said to hold the information and have, generally, to disclose it.

Roses are red, gave Violet pick 'n' mix. She didn't like the milk bottles. Now back to ethics