Astrophysicists have mapped the first 3D image of a gigantic dark matter filament for the first time. 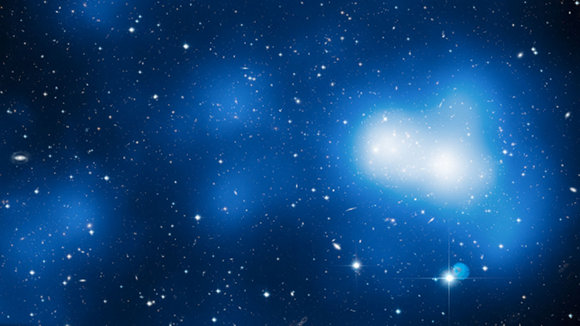 Dark matter can't really be "seen" as such, it can only be detected by looking at the gravitational effects it has on the space around it. But by collating images from the Hubble Space telescope, the researchers now have a picture of dark matter (shown in blue above) extending 60 million light-years away from one of the most massive galaxy clusters astrophysicists know about – MACS J0717.

Big Bang theories predict that when the universe was first created, dense matter condensed into a web of tangled dark matter filaments throughout the universe, a process they've mapped in computer simulations. But it's not easy to spot these filaments in space.

“Filaments of the cosmic web are hugely extended and very diffuse, which makes them extremely difficult to detect, let alone study in 3D,” said the study's lead author, Mathilde Jauzac of LAM in France and University of KwaZulu-Natal in South Africa.

The cluster was chosen because theories of cosmic evolution say that that's where filaments of the cosmic web should meet. The team then developed new tools to convert image distortions, caused by dark matter filaments' mass bending light, into a mass map.

The boffins combined images taken all around the galaxy cluster using Hubble, Japan's Subaru Telescope and the Canada-France-Hawaii Telescope along with spectroscopic data from WM Keck and Gemini Observatories to figure out the shape of the filament. Their paper, A Weak-Lensing Mass Reconstruction of the Large-Scale Filament Feeding the Massive Galaxy Cluster MACSJ0717.5+3745, will be published in the online issue of Monthly Notices of the Royal Astronomical Society this week.®