A critically endangered orangutan has been rescued after wandering into an area of forest in western Indonesia where palm oil companies have been illegally destroying the environment, a conservation group said. 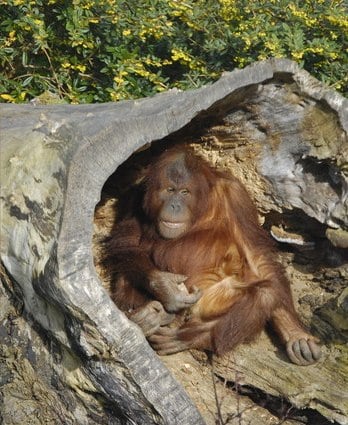 The Sumatran simian had been trapped for days in a diminishing spot surrounded by palm oil plantations and isolated from the rest of the surviving orangutans in Tripa swamp. It was found and evacuated over the weekend, the Sumatran Orangutan Conservation Programme told AP.

The swamp used to be home to around 3,000 of the apes in the 1990s, but is now home to only around 200 out of just 6,000 Sumatran orangutans left in the wild. Despite the reduced population, the legally protected conservation area still has the densest population of orangutans in the world, SOCP said.

But a number of palm oil companies in the region are currently being investigated for breaking that law and the permit for one oil plantation has already been cancelled.

"We are always happy to see a successful rescue take place, but these activities are expensive, logistically challenging and also dangerous, for both staff and the orangutans themselves," Ian Singleton of the group said.

"It's not the orangutans that should be leaving this area, it is the palm oil companies who are breaking the law." ®

Palm oil is commonly used in cooking and the food industry generally. However it can also be used to make biodiesel for use in vehicles and aviation, and this is forecast to increase with some analysts suggesting that biofuel requirements are driving increased planting of oil palms.

Welcome your new ancestor to the Homo family tree; boffins have discovered a new tiny species of human