Not that New Horizons has any shields as such, but it has got a radio dish which could be rotated to soak up micro meteorites now thought to abound in the Pluto system. That system is now known to comprise at least five moons, and may well sport rings and other debris, which is prompting the team to look at their options.

It was much simpler back in 2006, when New Horizons was launched. Pluto was a planet and only had three moons, but since then the distant body has been downgraded to a "dwarf planet" and the space atlases now show a couple of moons small enough to indicate that there may be a host of smaller particles knocking around the area - any one of which could knock out New Horizons as it approaches at more than 30,000 miles per hour. 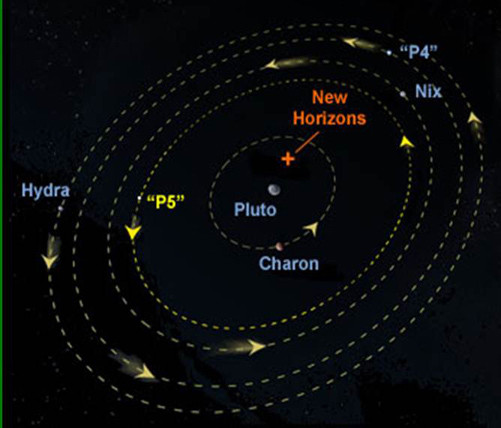 New Horizons won't arrive until July 2015, so there's still time to make a plan: the craft could be steered into a safer trajectory within ten days if necessary, but the question is how safe one needs to be.

The current plan is to slot between Pluto and its largest moon Charon, achieving a resolution of a tenth of a kilometre on Pluto's surface, shooting further out will reduce that resolution but is obviously better than smashing the spacecraft into a hitherto unseen obstacle.

Pluto is a very long way off, so seeing what's in the area is tough. Charon is the biggest moon by a long chalk, being more than a thousand kilometres across, while Nix and Hydra are only a tenth the size. But the last two moons, snappily named P4 and P5, are in the tens of km and P5 was only discovered earlier this year so any number of smaller bodies might be lurking in the darkness to waylay an unsuspecting traveller.

So telescopes will be trained on the area in the hope of gathering more data, while computer models try to work out what process would create such a system and whether that process would leave a halo of rubble or a clean house. The trajectory decision isn't imminent, but after a decade of planning and six years of flying it would be a shame to pilot the ship straight into a rock. ®