Not only does a growing majority of Americans believe that global warming is, indeed, underway, but for the first time a majority have come to the conclusion that it's caused by human activity.

"Americans' belief in the reality of global warming has increased by 13 percentage points over the past two and a half years, from 57 percent in January 2010 to 70 percent in September 2012," report the Yale Project on Climate Change Communication and the George Mason University Center for Climate Change Communication in a survey published this week.

The Reg is quick to note that reference to "the reality of global warming" as an indication of the survey groups' mindset, but with last year's confirmational global warming study by UC Berkeley scientist Richard Muller, the record-tying global temperatures of last month and second-warmest this May, this summer's unprecedented Arctic ice melt, NASA headman James Hansen's recent pronouncement that the US summer heatwave had "... virtually no explanation other than climate change," near spot-on warming predictions found in a 30-year-old paper, and rabid drought-driven skunks attacking suburban America, it's a safe bet that no confirmation bias was needed for Yale and George Mason to uncover a growing concern about global warming among their 1,061 interviewees.

Most surveys of this type – such as those published by the Brookings Institute this February, Gallup the following month, and the University of Texas in July – have shown that Americans' belief in global warming peaked in 2008, two years after former US veep Al Gore's mass-market An Inconvenient Truth was released in May 2006 and introduced anthopogenic global warming (AGW) to pop consciousness. 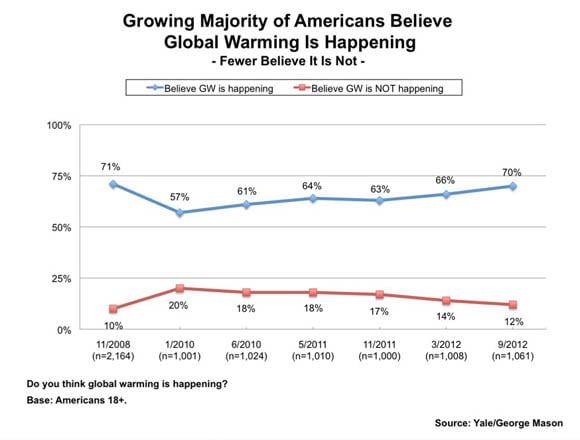 After that peak, and after a torrent of skeptical responses that ranged from the reasonable and thoughtful Judith Curry to the clownish "Look at me! Look at me!" rants of Senator James Inhofe – and, of course, the finely reasoned discourse in the hallowed pages of The Reg itself – belief in both global warming and its human-caused acceleration dipped.

That trend, however, has reversed in the US – despite the fact that The States is an acknowledged leader in giving air time and print inches to climate-change skeptics.

According to the Yale and George Mason survey, more than half of Americans now accept AGW as true – the first time this has been the case since the 2008 peak. As one consequence of this increase, the number of those who believe that global warming is being caused by natural processes has dipped to 30 per cent – the lowest since the survey began in 2008. 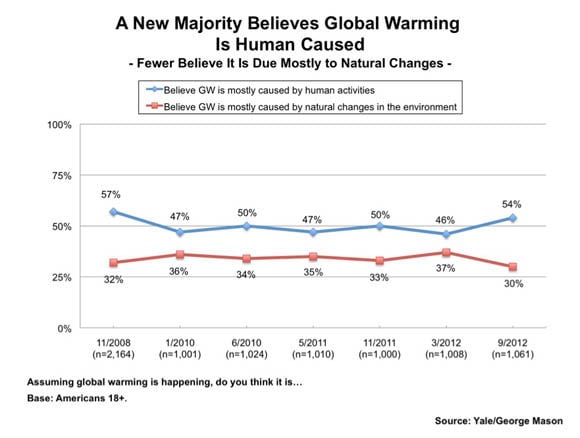 By the time the Yale and George Mason survery was conducted from August 31 through September 12 of this year, "... the number of Americans who say global warming is not happening has declined nearly by half, from 20 percent in January 2010 to 12 percent today," the survey reports.

Of course, that lack of surety might be perfectly reasonable, seeing as how climate-change skeptics are, well, skeptical – an honorable trait. But it's instructive to note that the degree of extreme surety among skeptics has been declining – albeit in fits and starts – since 2008. 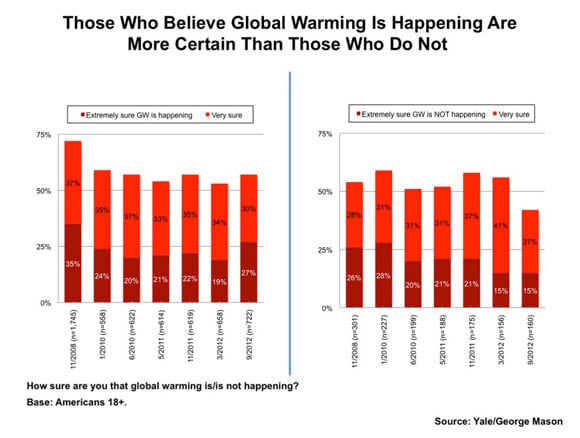 Of course, the opinions of the interviewees surveyed do not shed light on whether or not AGW is actually real or not. That's not the point of the survey; its results merely indicate what Americans believe. That said, it's instructive to look at the responses given by the interviewees when asked whom they trust when it comes to climate science – after all, we all rely upon experts when forming opinions outside of our individual areas of expertise.

Despite the best efforts of some of the more ad hominen attacks made by particularly aggressive climate skeptics, the Yale and George Mason interviewees "strongly trust" climate scientists as a class far more than any other source surveyed – two and one-half times more than other scientists whose expertise is not in climatology, in fact. 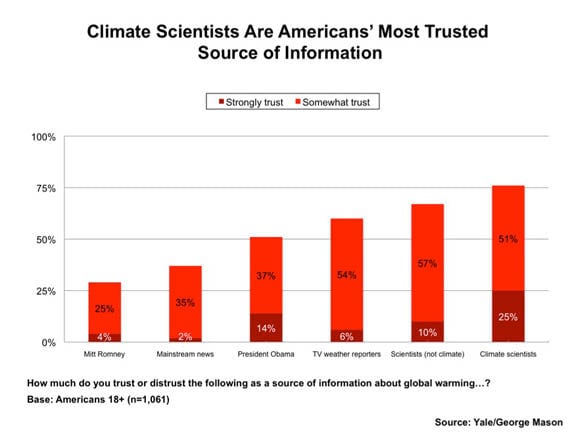 Also interestingly, the survey notes that Americans are coming around to the understanding that most scientists "think that global warming is happening", despite the efforts to level the argumentative playing field by otherwise well-meaning media outlets, which prefer to present a "balanced" point/counterpoint attempt at an even-handed debate when, in fact, the consensus belief among climate scientists is that global warming is real. 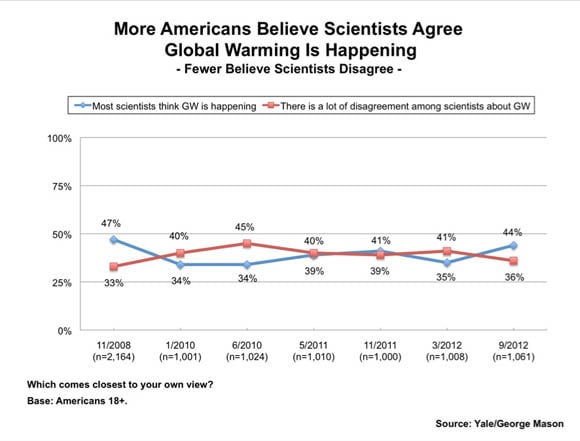 The level of belief among scientists – climate scientists and others – in AGW is in dire need of an updated survery. The most recent comprehensive, arguably even-handed survey on AGW agreement among scientists that we could uncover was submitted to the Proceedings of the National Academy of Sciences in December 2009 and published the following April. Much has been argued and much has been discovered since that time, and the matter deserves an objective re-examination.

That study's results, however, are instructive. It surveyed publication and citation data of 1,372 climate researchers, and determined that "97–98% of the climate researchers most actively publishing in the field support the tenets of ACC [anthropogenic climate change] outlined by the Intergovernmental Panel on Climate Change, and (ii) the relative climate expertise and scientific prominence of the researchers unconvinced of ACC are substantially below that of the convinced researchers."

The Yale and George Mason survey shows that the American public seems to be catching up with those researchers. ®