Elliptical? Spiral? We report, you decide

A team of astrophysicists have discovered the first celestial agglomeration that qualifies as both an old, settled-down ellipical galaxy and a young, vigorous spiral galaxy.

Centarus A, more prosaically known as NGC 5128 and discovered in 1826, has long been recognized as an elliptical galaxy, but a paper in The Astrophysical Journal Letters reports that deep inside it lie the spiral arms of a galaxy that it swallowed around 300 million years ago.

"No other elliptical galaxy is known to have spiral arms," the paper's lead author Daniel Espada said when announcing the discovery. "Centaurus A may be an old galaxy, but it's still very young at heart."

Those arms have been hidden by a wide band of dust streaking across Centarus A's edge – a telltale sign of that long-ago collision – but Estrada and his team from the National Astronomical Observatory of Japan (NAOJ) and the Harvard-Smithsonian Center for Astrophysics Harvard-Smithsonian Center for Astrophysics (CfA) have peered through it with a radio telescope, detected signals from carbon monoxide gas within, and used those signals to map two distict spirals hidden inside the elliptical galaxy's core.

The telescope used for the mapping was the Smithsonian's 8-dish radio interferometer Submillimeter Array (SMA), located near the 4,205-meter (13,800-foot) summit of the sacred – and dormant for the last four or five thousand years – Mauna Kea volcano in Hawaii.

The detection of the spiral galaxy hiding inside the eliptical one was aided by the fact that Centarus A is rather close to us humans – although by our terrestrial standards, its distance of about 12,000,000 light years, or about 1.14×1020 kilometers (7.05×1013 miles), may seem a bit more than a mere cosmic hop, step, and a jump. But seeing as how NASA has snapped images of galaxies 13.2 billion light years away, Centarus A is a relative neighbor. 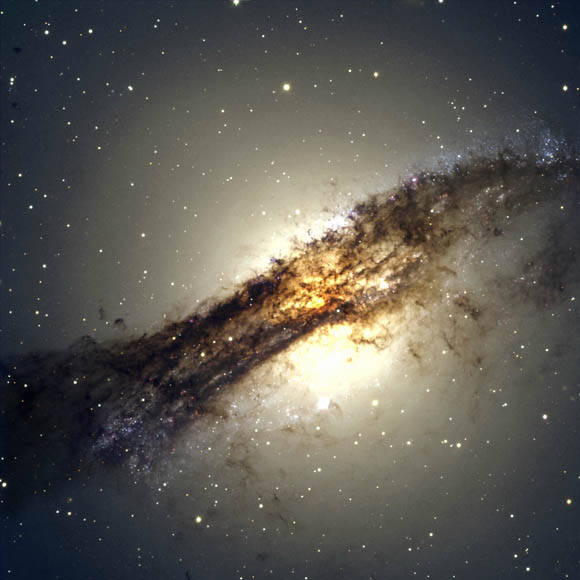 While elliptical galaxies such as Centarus A are senior citizens in the galactic sense, with most of their stars old and tired, spiral galaxies – such as our own Milky Way – are far younger and more energetic, pumping out new stars as they spin their way through the inky void.

Thanks to Estrada and his team, however, Centarus A is now known to include the best of both worlds: a calm astral retirement community and a peppy source of new stellar material. "Centaurus A has been given a new lease on life by that past merger," said Espada, referring to the galactic gobble of 300 million years ago.

Interestingly, although Centaurus A may be the first "bi" galaxy that astroboffins have discovered, it's more than likely that it's not unique. After all, there are – to channel the late Carl Sagan for a moment – "billions and billions" of galaxies out there in the firmament.

And there are better tools to find them than the SMA. As nifty as it may be, the SMA is a radio-telescopic piker when compared with the Atacama Large Millimeter/submillimeter Array (ALMA) in the high (5,030 meters, 16,500 feet), dry (no rainfall has ever been detected in some areas) Atacama desert in Chile. ALMA's far higher capabilities should allow it to discover other galaxies with the spiral-in-an-elliptical makeup of Centarus A.

"We definitely will use ALMA to search for other objects that are similar to Centaurus A," said Espada. Here at The Reg, we'd put good money on him finding them – but for now, like the cheese, Centarus A stands alone. ®

Centarus A's dual nature may make it the sole member of an exclusive galactic club, but it's certainly not unique among famous multifunction items. Two examples: Saturday Night Live's Shimmer ("It's a dessert topping, you cow!) and Cadbury Adams' Certs ("Two, two, two mints in one!").