Nobody owns the Linuxes, Julian 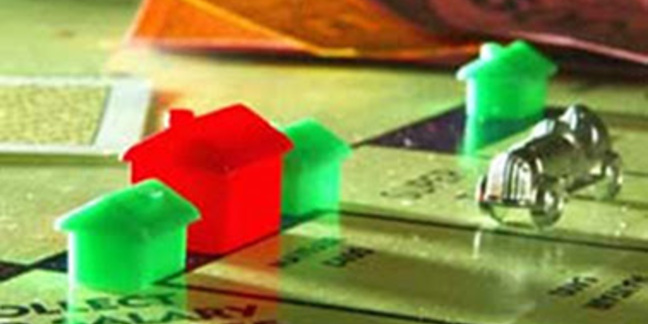 Stob As you have surely heard, it’s Alan Turing’s centenary this year, and the Bletchley Park museum is celebrating by releasing a game of Monopoly themed on the life of that mathematical genius. I’ll pause for a sentence or two here, while you let your boggle levels equalise, because, given Turing’s life story, this is a quite a bizarre concept to digest. For example, what are the Chance cards going to be like?

You are convicted of gross indecency. Go directly to Jail. Do not pass "Go". Do not collect £200.

Alternatively undergo a course of oestrogen injections to reduce your libido.

Anyway, this occurrence, combined with the grisly task of installing a new Windows server at work, and the experience of playing, as a favour to a friend, the formidably dull game IT Manager Duels (an Intel promo – you win by buying more machines... duh), have convinced me that it is time to go public with my own board game.

Fantasy Local Area Network borrows from the classic Monopoly – although in a way that is ingenious and fun and will, we hope, keep the Parker Bros' IP lawyers scratching their heads for the foreseeable.

Instead of the sooooh 20th Century scramble for property, the players acquire Local Area Networks to manage as they move around the board. These are then populated with little green pieces of plastic (representing workstations and laptops) and large red pieces of plastic (representing servers). The playing cards are (of course) in four suits: ISA, VESA, PCI and PCI+. You need to throw a throw a six to boot up - optionally making the appropriate whooshing noise - and then when you pass Go, you...

But wait. Rather than tediously walk you through all the rules, let us sit in, as it were, on a game in progress. Things will become perfectly clear.

Dick: That was in my glass!

Anne: Sorry. More ginger plop than ginger pop. I suppose it’s floating side up that counts. Got a four. Let’s see. One, two, three, four, and I’ve landed on Red Hat Square. Who owns Red Hat?

Julian: Haha! I own the Linuxes.

George (smugly): Nobody owns the Linuxes, Julian. They belong to the People, like the NHS, the late Princess Diana and Mo Farah.

Julian (warmly): They do not.

Anne: Oh, don’t let’s quarrel! Anyway, I suppose I must pay a forfeit. What is my forfeit, Julian?

Julian: You must spin the Wheel of Google.

Dick: Must you really do that every time?

George: What have you got, Anne?

Anne: It says: ‘Your virus-checker downloads an update that causes it to go insane and detect itself as malware. It tries to delete itself on every workstation on site. Helpdesk goes into meltdown. Spend three days trying to clear things up.’

Julian: I must say, that doesn’t sound very likely.

Dick: My go. Before I start, I’d like to promote my workgroup to a domain. Here, I’ll put the money for Windows Server licence in the bank. There. So, I’ll just throw the die... Four. Oooh, look, free mail server. Yipee! Goodbye to free Yahoo semi-numerical email addresses for my company!

Julian: So where are you going to install your mail server?

Julian: You’re not going to install it on your domain controller, are you? That’s bad practice, that is.

Julian: So where are you going to put your forest roles?

George: Oh Dick! Surely you aren’t going to have your Domain Master and your RID master on the same machine?

Dick (desperately thumbing through his cards): Um. Actually, I picked up this virtual machine card, so I thought I’d...

Julian (shocked into using his brother's Sunday name): Richard! You really aren’t going to perform a Physical to Virtual migration of your PDC, are you? Or... or install VMware?

George (her most sanctimonious voice): Everybody knows a domain controller isn’t for using. It is a holy thing: the most expensive kit in the building. It exists only to be worshipped and backed up, unencumbered by the commonplace vulgarities of ordinary life such as application software.

Julian: Dick’ll be wanting to use his PDC as a file server next.

Anne: Don’t tease him, Ju, he’s had a setback. Dick, you are a silly chump! You must miss a turn to re-plan your strategy. Whose go? Yes, go on George, and hurry up before I have to go and cook supper. By the way, what do you want for supper, Timmy?

Julian: I told you your mobile phone policy was too slack. The way you’re going, you’ll never extend your network beyond 200 seats.

Dick: Time’s up! Change passwords, everybody.

Julian: It’s one of the underlying planks of good security, George. You know that.

Anne: Don’t let’s make a fuss, George. I’m going to change mine to ‘strawberry’, because it’s my favourite fruit.

Julian: Anne, even for a girl, you really are a numskull.

George: Shall I shake for you, Tim? There we go. Four. Eeny, Meeny, Miny, Mo. ‘Risk or Reboot!’ What do you want to do? If I know you, you’ll want to take the risk.

George: Ok. The card says, ‘You have merged with another company. Drop everything, and spend three turns going through the hell that is the domain renaming process.’

Julian: Tricky one, that. Bad luck, Timmy. You will probably want to practise on a sandboxed test network a couple of times before you do it on the real thing.

Julian: My turn. Actually, I’m not throwing the die this turn. In fact, I never believe in throwing the die. Instead, I am taking time to perform a practice restore on all my backups, so that I won’t be caught out in the event of a disaster. Any time I have left over, I will spend in web support fora, mocking those who have been less diligent than I, and now find themselves badly inconvenienced by the stern and immutable finger of fate.

George: Cousin Julian, can I just say something?

George: You really are an unspeakable prig.

This charming scene, mixing the pleasures of family life with NetBIOS over TCP/IP, is just the sort of thing YOU could be doing on Christmas day, in between bringing the pudding/brandy fire under control and the argument over the newspaper quiz.

Send off 400 medium sized ones today to Stobbo Enterprises for your copy. Postal orders welcomed, Paypal not. Thanks for listening. ®