You may find your sales rep is more willing to deal ...

EMC has scraped year-on-year revenue and profit hikes for its third 2012 quarter but reported ever-so-slightly lower numbers than the second quarter, a pattern not seen in the past two years. 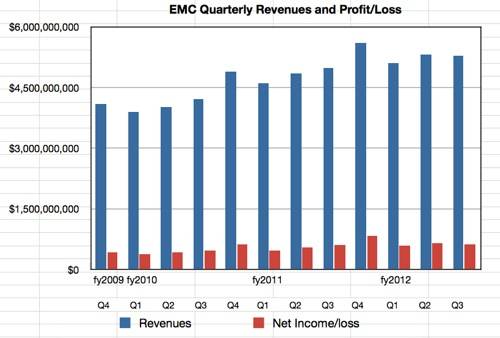 These are the bald numbers. What's behind them? The economy is softening but EMC is weathering that quite well, with CEO and chairman Joe Tucci saying: "EMC's third-quarter revenue and profit growth reflect the resiliency of our business in a more uncertain global economic environment."

COO and president David Goulden said: "For the third quarter, EMC's business continued to grow faster than overall IT spending growth and we gained market share in what turned out to be a more cautionary environment than we expected heading into the quarter. Going forward, we fully believe that EMC will continue to grow faster than our addressable markets and take share, reinvest for the future, and deliver earnings leverage for shareholders."

EMC stated that, on a year-on-year basis:

More than 300 VSPEX converged system template products have been sold since April this year. The company said demand for Isilon scale-out filers, its backup and recovery systems products, such as Data Domain, Greenplum analytics products, and the VCE converged Vblock systems business all grew but didn't call out any numbers, suggesting that none of them grew more than in the low single digits.

Is such a sharp jump in fourth quarter revenues achievable, given a pattern of results from other companies, such as WD, that show a dampening of demand continuing into the fourth quarter? Customers might find their EMC sales reps are more willing to deal than normally as they try to close business in the quarter.

Also hosed out many Datrium staff on day one