What you really, really need to know

[Note: We received this FAQ document anonymously and cannot confirm its authenticity. However, it has such dead useful advice, we thought we'd share it with you - Eds]

Q. Who is this guide for?

A. This guide is for users who want to take advantage of new technologies in Windows® - such as faster performance, shorter boot time, new virtualisation technology, and pooled storage - but wish to minimize the disruption to their personal workflow.

Q. What disruption should I expect in Windows® 8™?

A. User interface designers have been researching the consequences of context-switching for thirty years. Context-switching, or switching between running applications, causes user confusion and loss of productivity, as the user adjusts to different behaviours. However, instead of minimizing disruption Microsoft® has made this confusion a key feature of the Windows® 8™ user experience:

Q. How do I distinguish bugs from features?

A. The traditional taxonomy is as follows:

With Windows® 8™, Microsoft® has taken an innovative approach and discarded this taxonomy. The user is instead offered a holistic and integrated user experience where the old distinctions are no longer relevant. An aspect of the software’s behaviour may be a bug, or it may be a feature. For users unwilling to accept the distinction at first, this guide will help them maintain productivity while pivoting to the new Microsoft® Windows® 8™ user experience paradigm.

Q. How do I minimize context-switching?

A. In previous versions of Windows®, the [Windows] key invoked the Start Menu. Microsoft® has removed the Start Menu feature, but for compatibility reasons retained the name, and replaced it with an entirely new feature.

Now, pressing the Windows® [Windows] key acts as a portal between two completely self-contained universes: the Metro Notro desktop and the traditional Windows® desktop. Users are advised to avoid disruption by installing a third-party alternative.

Several are available, and are listed here in alphabetical order:

Q. What functionality is duplicated?

A. Windows® 8™ includes two web browsers – both called Internet Explorer - and two Control Panels. In addition, there are two opportunities to log into the system: one for cloud access where personal data is stored on Microsoft® servers, and the traditional Windows® client login.

Q. How can I restore functionality missing in basic helper applications?

A. The default viewer application for images is a Metro application. It contains the following options:

Users wishing to use features they expect from previous versions of Windows® should replace the default Metro applications with others provided. To change the image viewer: 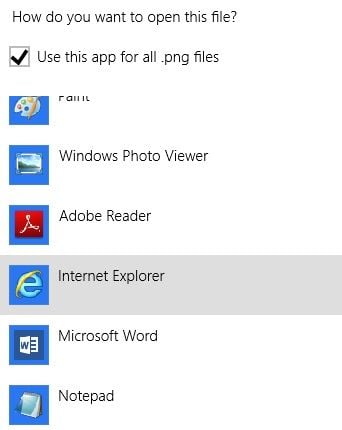 Note: we do not recommend opening PNG files in Windows® Notepad.

Next page: Q. How can I print from Metro applications?
Page: