After a brief pause for recuperation after the Windows 8 launch, Microsoft's Windows supremo Steven Sinofsky went straight out and started on Surface and how it measures up to competition.

At Thursday's launch event in New York the Surface team showed off their favorite fondleslab, including a semi-daring drop test from about five feet onto the podium floor by Panos Panay, the general manager of Surface.

You could drop it the Surface in 72 different orientations he promised, and said they'd done it themselves. Those long summer evenings in Redmond must just have flown past.

Taking on Apple by design

Paney was at great pains to talk about the quality and design of the tablet. It had been built from the "inside out," he said, with over 200 custom components and with the batteries and other internal systems are distributed to give an even weight. Microsoft has invested in specialist Chinese factories to forge the liquid metal 'Vapor-Mag' frame he said, and the Surface was strong enough to turn into a skateboard, as Sinofsky tweeted earlier this month.

Sinofsky and his Surface skateboard

In resolution terms the Surface is well behind the iPad. But its screen has other advantages, according to Paney. The 10.6 inch Gorilla 2.0 glass is designed to be the perfect size to display the Windows OS and uses Microsoft's ClearType font-enhancement system. By bonding the screen directly onto the casing the team managed to get the thinnest screen on the market today he claimed.

Not that the iPad was mentioned by name at all, but Microsoft's clearly aiming to get into Cupertino's market with the Surface. "[It's] starting at $499 for the 32GB version and we think that's a pretty darn good price," said Sinofsky." You know, it's twice the amount of storage as a competing tablet for the same price."

It was then perhaps no coincidence that a considerable portion of the presentation stressed one of the iPad's real weaknesses, native ports. The Surface has a full-sized USB 2.0 port (which meritied its own demo) and a microSD slot, giving up to 128GB of storage per device.

The quality theme continued with a tales from Paney about the powerful nature of the 2x2 MIMO 802.11a/b/g/n antennas, which kept him in contact on his hotel's rooftop to the two hour recharge time the tablet gets after he has a long trip to China.

It almost got a bit much with the demo of the three hinges in the kickstand built into the back of the fondleslab, which are apparently "precisely put in this device for a reason, a balance of making the perfect sound come off the device and the perfect feel," Paney said. It is designed to simulate the operation of a "high-end car door." The visceral response users get from the kickstand will be critical he said.

So why is the kickstand so important? According to Paney, it's the key to seeing Surface as a laptop as well as a tablet, when used in conjunction with Microsoft's Touch Cover keyboards. Purchasers of the $499 fondleslab-only package can skip this bit, or spend $100 or so on their own colorful Touch Cover.

The kickstand is angled to give the perfect viewing angle for laptop use and the 3mm-thick keyboard is pressure-sensitive rather than capacitive so that you could rest your hands on it and not fill the screen with junk text. Typing speeds, after a "small learning curve," are good enough for all but the speediest of fingersmiths he claimed, and the cover was designed to feel like a book in the hands. 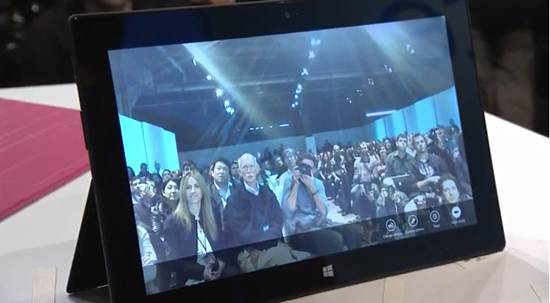 The camera in the back of the Surface is angled at 22 degrees, so that when used with the kickstand it takes a floor to ceiling shot of a room. This means students can use it to record lectures or meeting participants to video meetings, which can come in handy when it's ass-covering time.

Surface comes with the slightly downgraded version of Office, but it covers the classics: Word, Excel, PowerPoint, and OneNote. All the projection for PowerPoint and lighting was run off a single Surface, while another running Excel was organizing the show's call-sheet and multitasking is easy Paney said.

The laptop sell is a trickier one for Microsoft to make. As was pointed out at the earlier Windows 8 launch you can by a touchscreen laptop for $499 and a standard model for $300. Lashing out $600, even for something this slim and elegant, may stretch the wallets of IT managers and parents.

Surface systems go on sale from Thursday night, starting with a store opening in New York, and preorders have been brisk. Whether or not people will line up in the night remains to be seen, but if you want to try out the Surface you'll have to go to a Microsoft Store.

Both Ballmer and Sinofsky insisted that the only way to make your mind up about the Surface is to try it. Microsoft's set up "pop-up" stores across the country for just that person but there's not the push that Apple has behind its retail arm.

Surface certainly looks like a very nice bit of hardware, but capturing the public imagination in the same way Apple did with the iPad is going to be difficult. ®