Comment Six weeks ago Everything Everywhere EE announced the UK's first 4G network. "A new era dawned over London," Daily Telegraph writer Matt Warman told us. Mourners shuffled into the streets of Leicester and Stoke, and buried an enormous dongle in a mock funeral. That weekend, travelling football supporters from those cities were cruelly taunted with chants of: "You haven't got a 4G network - nah nah nah!"

And I decided it would be a good idea to wait.

This actually looks a better bet than ever, now that EE has released pricing information. The reason I'm sitting out 4G until at least next autumn isn't down to cost alone, though. If I thought LTE was worth it, I'd pay for it. Some people will undoubtedly take the plunge.

It's really a vector of two things: the price-data bundle offered on the one hand, and the speed-vs-battery-life issue of the handset on the other. For a few things have become a bit clearer since EE announced its LTE plans six weeks ago.

The first is that 3G has far more life in it than we thought. Aware that they'll be getting a marketing pounding from EE, which has an exclusive on LTE in the UK for some months, rival 3G operators have quietly been upgrading to the latest and much faster version of 3G. The latest flavour of 3G, dual-channel HSPA+, delivers quite amazing speeds on Three's network.

It consistently pumps 15Mbps to 20Mbps data down to handsets, though not, alas, near Reg HQ which is in the saturated West End of London. Three will have much of urban Britain blanketed with the go-faster 3G by the end of the year. Certainly, decent sized cities (including Leicester and Stoke) which have been snubbed by EE for the 4G launch, will be able to get the speed benefits.

Secondly, there are issues around caps and pricing. EE is already on the defensive here. I don't blame EE for introducing a premium tariff on LTE - it's exactly what you or would do, which is price your exclusive service to attract high-value punters. The price reflects what the market will pay, and some are going to want it at any cost. The price on SIM-only starts at £21. But the price isn't really the issue: it's the caps that are the killer. The basic tariff offers 500MB of data a month, which at 4G or even dual-channel 3G speeds goes in very little time - and it's rapidly consumed on slower connections too. You're looking at 5GB to be safe - which means £51 with a handset or £36 SIM-only. 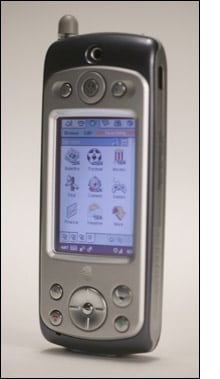 Then, remember that the LTE chips in this first generation of phones are immature and deplete the battery very rapidly, which for me is the clincher. It'll be next year, or the one after, before the chips are optimised for power consumption. Remember an LTE phone has seven antennae - quite a mind-boggling amount of baseband juggling is going on. The first generation of 3G phones in early 2003 looked like this Motorola A920, a 212 gram monster. Within three years the beast had been tamed: 3G phones weren't much bigger than 2G phones. LTE's appetite for power will be quelled too, but it will take a while.

My personal choice is for near-4G data speed when I need it and a phone that lasts all day, as opposed to 4G speed and a phone that craps out towards the end of a long lunch while rinsing me of all my cash.

That's not all. You may not have heard of VoLTE - but this is also an issue. Here's a primer. VoLTE (Voice over LTE) is the to do voice on 4G networks. Except nobody can do it yet. What your 4G phone does when it gets a call is drop back to 3G, resulting in a pause. This is called CSFB (Circuit Switched Fall Back). And EE will be CSFBing until 2013.

Eventually, 4G calls will be routed over the 4G network, and will be true VoIP, and what this means as a punter is that you'll finally get decent indoor coverage. In 2014, you'll be able to take advantage of the lower frequency spectrum bands. But this, as you can see, entails quite a wait.

Perhaps you're making similar calculations between speed and battery life. One intriguing bit of analysis has come my way that might be helpful, and it's an estimate of likely speeds. Realistic speed of the dual-channel HSPA+ flavour 3G will be about 12Mbps, while realistic speeds of LTE range from 13.8Mbps at 10MHz to 30Mbps 20MHz.

So I don't see a huge gain from the power and cost I'm sacrificing simply to get 4G. If I had an application that really and truly needed that slight speed boost, I'd grab it. But I simply can't think of one.

By this time next year, thanks to a mysterious deal between Ofcom and the operators, I expect we'll see a choice of 4G offerings, newer handsets, and I'll review the options. Right now, I'm sitting this one out. ®