More than one billygoat headed across that bridge, though

Sprogis is based in Florida, but the case will be heard in patent-holder-friendly Delaware and was spotted by Startups and IP Strategy. The patent in question covers the use of an NFC tag, and reader, to watch for loyal customers and trigger rewards based on visits, which is odd given that Google Wallet neither watches for, nor rewards, its users. 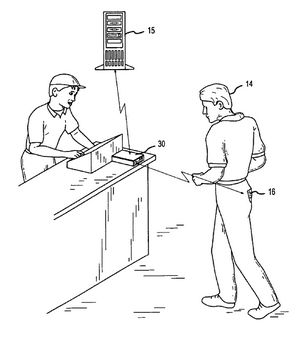 The company declined to comment on the case, only pointing out that the patent does cover NFC tags tapped against the reader as well as those passing nearby as indicated in the patent diagrams, but Google's decision to store the contents of a Google Wallet in the cloud may provide a clue as to why the Chocolate Factory is being targeted.

The patent in question, US number 7,298,271, covers the use of an NFC reader to log customer visits, and a remote server which stores those visits and decides when the loyalty becomes worthy of reward. But most NFC systems don't use a remote server - that's rather the point as NFC mandates an embedded "secure store" for all that stuff, which would seem to put it beyond the patent with the notable exception of Google.

Having failed to get many cards into its NFC secure store Google hit upon the undoubtedly-clever idea of putting credit cards into the cloud instead. One (Google) card is then stored locally to provide credit for the seconds, or perhaps minutes, when connectivity fails. It's a very clever solution, and one which is being aped (and expanded on) by Inside Secure, which reckons the entire secure element can be cloud based. But this approach does mean that any loyalty scheme could fall foul of Peter Sprogis's patent, which talks a great deal about server-based loyalty schemes.

To be fair to Sprogis, he's no patent troll, having founded Molo Rewards with the explicit intention of "utiliz[ing] my own granted patent for integrating wireless devices with RFID to issue and dispense coupons in any type of retail outlet" according to his LinkedIn profile, and Molo certainly seems to be actively attempting to achieve that. The timing would also belie the idea of a patent troll - a troll would wait until NFC was more popular, when more targets were available and payouts larger, not risk getting embroiled in litigation that could kill off such a nascent industry.

But the patent is far-reaching, and if Google is infringing it then so are half-a-dozen other businesses, with a dozen more hoping to infringe at some point as the patent largely describes their revenue stream. ®