A hybrid with potential for productivity types

Review “It’s the ultimate expression of a Windows PC,” says Windows chief Steven Sinofsky... or “a compromised, confusing product”, according to Apple’s Tim Cook, who has not used one. This is Surface RT, Microsoft’s first own-brand tablet, which went on sale today.

Along with the fact that it runs Windows 8, there are two notable things about Surface RT. One is that it is designed and engineered with more attention to detail than is normal for a Windows PC. The other is that it runs Windows RT, the version compiled to run on ARM processors and locked down so that you cannot install new desktop apps even if you can find versions compiled for ARM. New apps can only be installed from the Windows Store, other than in an enterprise context where a special product key can be activated to enable "sideloading", the word Microsoft uses to describe apps installed outside the Windows Store.

There is a desktop in Windows RT, but it exists only to run Microsoft Office 2013, which is installed in a cut-down Home and Student edition, along with standard Windows accessories, including Internet Explorer, MS Paint and Notepad. No new desktop apps can be installed, though you can write your own utilities using PowerShell or the Windows Scripting Host.

The installed version of Office is a preview edition of Office 2013, with the final version promised via Windows Update in a few weeks. Since it is Home and Student, there is no Outlook, and for mail you have to use the Mail app or I suppose Outlook Web Access or similar. There is no VBA (Visual Basic for Applications), nor add-ins or macros. The inclusion of Office is not quite the bargain it first appears, since it is restricted to non-commercial use unless covered by an additional licence. 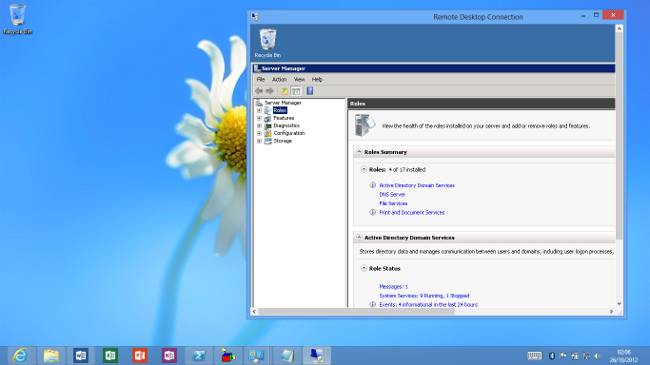 VPN and go: you can do a lot with Surface even without Windows Store apps

Out of the box, Surface behaves much like any other Windows 8 machine. This suggests that users new to Windows 8 may struggle initially with the new Start screen, but it should not be difficult to pick up since this is a device designed for touch. Microsoft should do more to guide new users, but that is a broad Windows 8 complaint rather than one that applies to Surface alone. Getting started is a matter of connecting to the internet and signing in with a Microsoft account, whereupon services such as SkyDrive cloud storage should, and in my case did, just work.

Surface RT has a 10.6 inch screen, an NVIDIA Tegra 3 quad-core processor, 2GB of RAM and 32GB or 64GB of solid state storage depending on the model you choose. The display is 1,366x768 pixels and supports five-point multi-touch. Wi-Fi and Bluetooth 4.0 are included, but not GPS or mobile broadband – two omissions which have caused disappointment among some potential early adopters. There is a USB 2.0 port, a microSDXC card slot and a video output that supports HDMI or VGA with a suitable adapter.

The presence of USB is a significant advantage. A Microsoft wireless mouse with a USB adapter worked instantly, and attaching a camera made its images immediately available. How useful is Windows RT, given that the selection of apps in the Windows Store is currently thin, and you cannot install new desktop apps? You can take an optimistic or pessimistic view. This is a new platform, and it seems harsh to complain about lack of apps; more and better apps will come. On the other hand, the success of the Windows 8 Store is not assured, so the choice may remain poor for a long time.