Connected to everything, except the desktop and sysadmins

Microsoft has officially taken the wraps of Windows 8 in Australia, without ever once mentioning a reason businesses would consider an upgrade or showing a single pixel of the 'classic' desktop.

Your correspondent has attended every Windows launch since the year 2001 and cannot recall one ever being so devoid of mentions about Windows' role on the corporate desktop. There was nothing in the launch for 'suits'.

Everything you need to know about the launch is encapsulated in the fact the four were introduced as “incredibly talented Australians” and that Windows 8 will help them “realise their dreams.”

Just how Windows 8 will do so was the subject of a 35-minute demonstration during which Microsoft staff showed off lots of features that a knowledge worker might find useful during their working day. The ability to create Live Tiles featured prominently, along with explanation of how they make it possible to avoid the tiresome task of visiting actual websites to obtain information. That shortcut was advanced as a chance to improve one's productivity.

Games, music and Windows 8's ability to embed web apps in the OS all got plenty of screen time. An app from Australian bank Westpac got more demo time than any other, with its abilities allowing personalisation and sharing of data portrayed extensively.

The hundred-odd members of the press who attended were offered a brief glimpse of an Office app running in a Window as a nod to the fact conventional Windows apps haven't been banished entirely. But at no time was the desktop visible, or even discussed.

Manageability or IT-department-level customisation didn't get a mention either.

To be fair to Microsoft Australia, its recent TechEd conference did cover a lot of that stuff in extraordinary depth, mostly for developers and sysadmins. But the lack of even a single word about Windows 8 in a corporate setting, or even the slightest of nods to CIOs, left open the question of whether Microsoft's dream is for mass, rapid, corporate desktop deployments. ®

The Reg also got a plug at the launch. We were featured prominently on the TIFKAM screen used to demo the OS by Microsoft Australia's Pip Marlow, as depicted below. 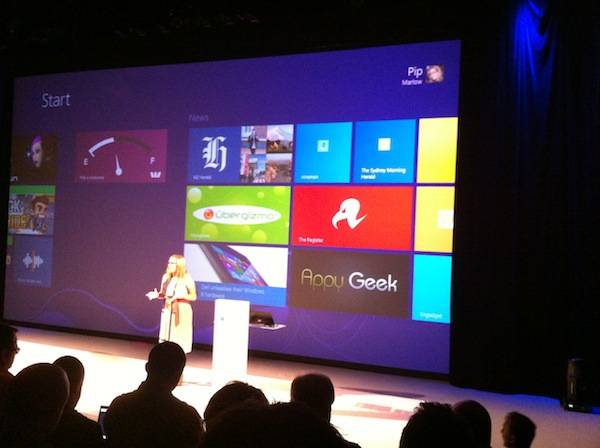