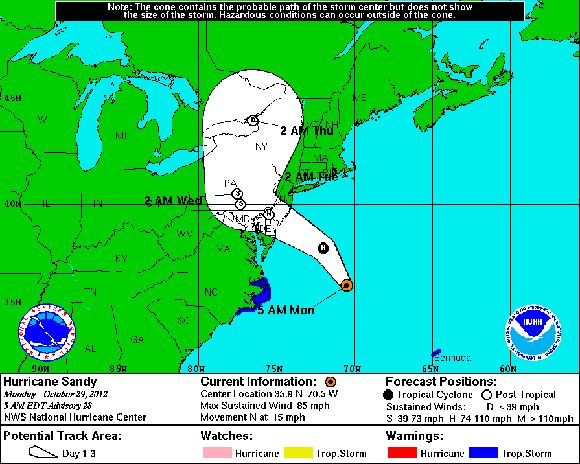 Google has launched its own crisis map of the region, compiled from NHC and US Naval Research Lab data as well as alerts and evacuation notices from weather.gov and earthquake.usgs.gov. One of the Google maps shows the total area affected while another focuses on New York City.

Google was scheduled to have an Android event in New York this morning on a waterfront pier that's now part of an evacuation zone. The rumour-mill was expecting the Chocolate Factory to unveil either or both an LG Nexus 4 smartphone and a Samsung Nexus 10 tablet.

Mountain View said in a statement that it was putting the event off for now.

"We will let you know our plans as soon as we know more," the firm said.

Tech stock exchange the NASDAQ has also shuttered its electronic market today and possibly tomorrow due to Hurricane Sandy.

"The continuity of our markets and a variety of factors related to Hurricane Sandy's movement up the Eastern Seaboard were considered, including the state of emergencies declared by New York City, New York State and other state and local governments," the exchange said in a statement.

The New York Stock Exchange was initially planning to go to its contingency plan, keeping trading going on NYSE Arca, the market's fully electronic exchange. But the NYSE will now be dropping the curtain on e-trading as well as the physical trading floor and its building in the city.

"We support the consensus of the markets and the regulatory community that the dangerous conditions developing as a result of Hurricane Sandy will make it extremely difficult to ensure the safety of our people and communities, and safety must be our first priority," the market said in a canned statement.

"We will work with the industry to determine the next steps in restoring trading as soon as the situation permits."

The governor of New York Andrew Cuomo closed the entire Metropolitan Transportation Authority's system – including the subway, bus and commuter trains – from yesterday evening to keep the city clear of its millions of workers.

“The transportation system is the lifeblood of the New York City region, and suspending all service is not a step I take lightly,” Cuomo said. “But keeping New Yorkers safe is the first priority, and the best way to do that is to make sure they are out of harm’s way before gale-force winds can start wreaking havoc on trains and buses.”

The NHC said that at 10am BST this morning, the storm was producing sustained winds of 85mph and was expected to veer northwest later today, making landfall on the coastline of New Jersey, most likely near Jersey Shore gambling mecca Atlantic City.

Aside from the dangers of the hurricane itself, the Eastern seaboard could face power losses due to gale-force and hurricane-force winds knocking out power lines, and flooding which could see the water level reach as high as 11 feet (3.35m) in New York harbour if the storm surge hits the tide at the wrong time. ®