Easier to repair than Apple's fondleslabs – though not by much

Teardown The teardown-happy folks at iFixit have taken their Torx wrenches and spudgers to Microsoft's new Surface tablet, but found few surprises inside.

They did discover, however, that the Surface is more easily repairable than either the iPad 2 or its follow-on iPad 3 – aka "the new iPad". iFixit gave the Surface a repairability rating of four out of 10, handily trouncing the iPads, which received embarrassing two-out-of-10 ratings.

It's clear, in fact, that Microsoft wants you to know that it has no desire for you to muck about inside its new tablet. After prying open the plastic cover hiding the torx screws holding the Surface together, iFixit's tinkerers found a tamper-tattling label sealing the body together, one that breaks apart when removed.

Not that such a warning would stop any self-respecting hardware geek with a teardown in mind. 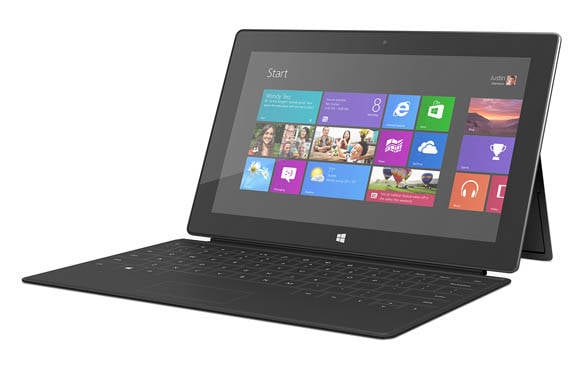 Behold the Microsoft Surface, Redmond's latest gamble in its year of living dangerously (click to enlarge)

That battery, by the way, is glued down, but iFixit pronounced it far easier to remove than the battery cells in Apple's fondleslabs.

The 10.6-inch ClearType display, on the other hand, won't be easy to replace should you crack it. "LCD and glass are fused together and strongly adhered to the case," they explain, "increasing cost of replacement."

Attached to the Surface's logic board are two 720p cameras – one front-facing the other facing the rear – were "almost identical" in size and shape, iFixit reported in an email.

"The exclusion of a multi-megapixel rear-facing camera either means cost was a big concern," they opine, "or that Microsoft's designers don't expect you to use the Surface as your main camera. Perhaps they too realized how goofy you might look when taking pictures with a tablet. 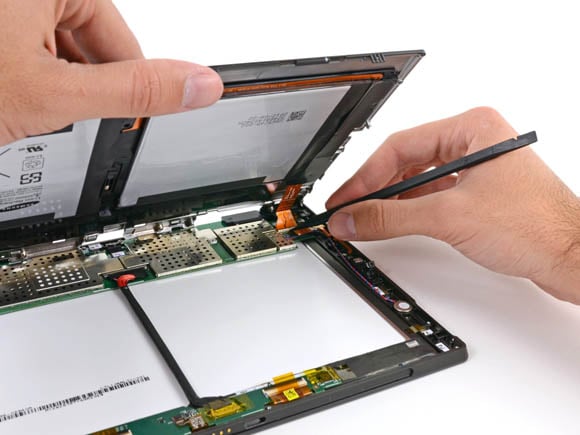 Just a single ribbon cable connects the two halves of the Surface, and it's easily detached (click to enlarge)

The logic board's brains are all on its top surface, with the bottom reserved for microphones, antennas, and an ambient light sensor, along with what iFixit identifies as a "precarious wire running most of its length."

As we explained when reporting iFixit's teardown of Apple's upgraded Mac mini, the tools-and-parts-and-repairs-and-teardowns folks at that website color-code their logic board chips for identification – a capability we at The Reg can't easily replicate. For the Mac mini, we attempted to describe those colors somewhat whimsically, an effort that some of our dear readers didn't appreciate.

So for the Surface teardown, we'll overcompensate with not only plainer language, but also by using Apple's Digital Color Meter app to determine iFixit's color coding's RGB values, then firing up Adobe Photoshop to convert those 0-to-255 specifications into hexadecimal values.

Here's the top of the Surface's logic board (click to enlarge) ... 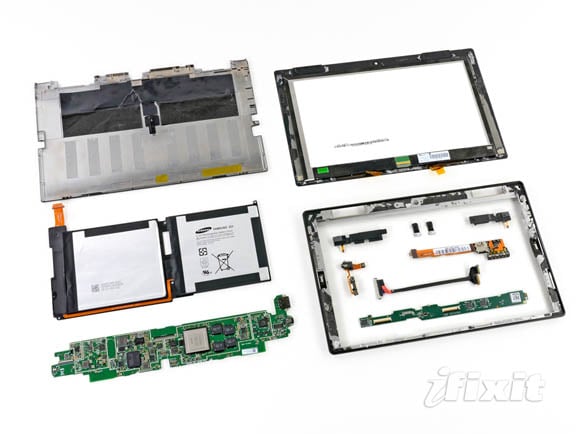 All in all, the Surface is a rather straightforward piece of kit. To examine its innards further, you'll need to point your browser at iFixit's full teardown, replete with 42 photos and the teardowners' characteristically impudent commentary. ®