Geologists have found the culprit behind a huge tsunami that devastated the site of the Swiss city of Geneva in 563 AD and say a similar wave could be in the city's future.

"Out of its banks it devastated villages with very old men and herds, it even destroyed many holy places with their priests and rose with fury over the bridge at Geneva, mills and men, and went into the city of Geneva, there are many people slain," wrote contemporary chronicler (and later local saint) Marius Aventicensis of the original wave.

Both Aventicensis and the Frankish historian Saint Gregory of Tours wrote about the event, describing how the local Mount Tauredunum collapsed, causing the wave, but the scientific community had been split on exactly how it occurred. One school of thought felt the rocks created a dam, which later burst, while another postulated the landslide itself caused the monster wave.

A paper published in Nature Geoscience appears to have found the answer on the bottom of Lake Geneva, and turns out neither theory is totally correct. But the suggested cause is not good news for the million or so people who live surrounding the lake today.

"It’s certainly happened before and I think we can expect that it will probably happen again sometime," says geologist Guy Simpson, from the University of Geneva, one of the researchers behind the project.

The researchers used seismic testing of the lake bed and discovered a fan-shaped deposit across the floor of the lake, averaging five meters thick and covering 50 square kilometers. It emanates from the western tip of the water body where the Rhone river enters the lake, near the location of the ex-Mount Tauredunum.

By taking sediment cores, the team found it was composed of turbidite, which is formed when sediment is disturbed, typically by earthquakes and landslides. The cores have been dated to between 381 and 612 AD, making them highly likely to be linked to the event.

The team suggests the turbidite was formed from a layer of silt that was deposited by the Rhone as it enters Lake Geneva, and is still being deposited today. Over the passage of time, the silt builds up into a broad delta of mud that forms into canyons as material falls into the deeper part of the lake. 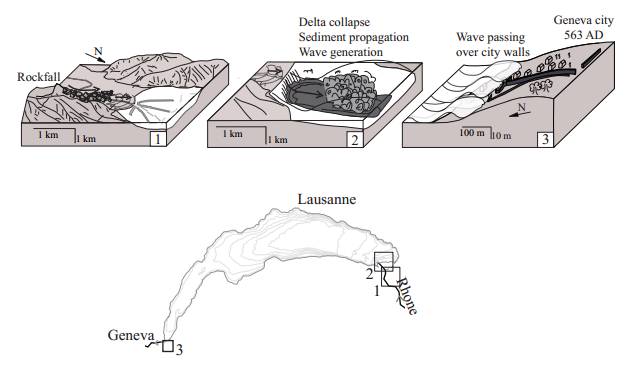 For whatever reason, most likely an earthquake, a large chunk of the mountain slid into the lake near or on top of this silt and caused the entire structure to slide onto the lake floor. The displacement triggered a tsunami that rushed around the arc of the lake, washing over the site of the current city of Lausanne with a wave 13 meters high and drenching Geneva with eight meters of watery destruction.

Lest property prices start crashing in the area, "will probably happen again sometime," in geological terms, is likely to be a very long-term bet. But there have been plenty of examples of similar tsunamis in the past and geologists are have been warning for years about one event that could wash away the entire US Eastern seaboard.

When the Cumbre Vieja volcanic mountain on the Canary Islands last erupted in 1949, a local geologist found it had cracked, with the western face (estimated to be made up of 500 cubic kilometers of rock) sliding down two meters towards the Atlantic Ocean. The islands are very volcanically active and the last eruption occurred in 1971.

In a worst-case scenario, the entire side of the volcano could slide into the sea. That amount of rock hitting the ocean would generate a kilometer-tall tsunami that would still be 50 meters high when it hit the US coastline, with the wave fanning out to disrupt Western Europe as well.