AMD, Samsung must be ARMed to the teeth to oust Intel servers

The attack always comes from below - and at the edges

Analysis Let's start with the obvious. Everyone is spoiling for a fight to end Intel's hegemony in the server processor racket. But two decades ago we backed Intel to oust that arena's ruling silicon families kicking - and the chip giant successfully invaded servers around the world. The question we now face is this: can ARM do to Intel what Intel did to the likes of Cray and the high-performance RISC processor players of yesteryear?

That's nothing against Chipzilla, but rather an observation that only through competition and healthy rivalry does innovation occur.

Intel rested on its laurels a decade ago, trying to make a place for and a case for 64-bit Itaniums in a Xeon world that Intel insisted would remain at 32-bit. This gave Advanced Micro Devices a perfect opportunity to deploy and capitalised on its Opteron family of 64-bit x86-compatible processors, which were not so much clones of Xeon processors as much as they were the way Intel should have designed its 64-bit Xeons in the first place.

And the proof in that pudding is the fact that Chipzilla's Nehalem family of Xeon processors, which came out in 2009 and have been significantly enhanced since then, bear more than a passing architectural resemblance to the Opterons, with 64-bit memory addressing, multi-core support woven into the design, point-to-point interconnects between sockets for linking other processors and peripherals, just to name a few technologies.

Intel has subsequently revamped its processor designs with this year's Xeon E5 processors. AMD is resting on its laurels and licking its wounds after server makers ratcheted down their commitment to Opterons as the Great Recession got roaring in 2008. When AMD had issues with the Barcelona Opteron chips, server makers saw what was coming with the Nehalem Xeons and concentrated their efforts there.

The remaining server-class RISC processors – Sparc T, Sparc64, and Power – are not presenting much of a challenge to Xeons, and neither is Intel's own Itanium. They have their places in the data centre, and plenty of application code will keep them economically viable for years to come. But these are not growth areas for any of the RISC/Unix players, and the odds are that these businesses will at best stabilise at some kind of equilibrium, hopefully with enough of a revenue stream to justify continued investments in Sparc, Power, and Itanium processors to keep customers from having to do ports.

VMware CEO Pat Gelsinger, who oversaw the design of Intel's 486 processor, and then worked on the RISC-like Pentium and then the Pentium Pro chip that put Intel into the server racket formally, knows a thing or two about the server world. Gelsinger was Intel's first chief technology officer, and then was for many years general manager of what is now the company's Data Center and Connected Systems group. He then spent a few years running EMC's core storage business before becoming chief exec at server virtualization juggernaut at VMware in September.

Gelsigner gave an interesting keynote address at the Hot Chips 24 conference about processors in clients and servers, and one of his slides, see below, shows just how far and how fast the x86 processor has come in the data center: 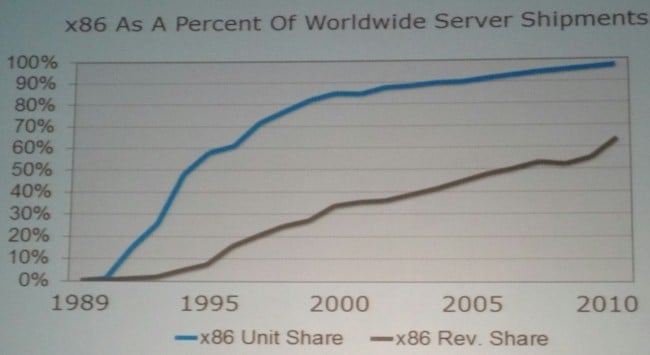 "This is the only architecture that matters in the data centre," Gelsinger declared about the x86, and no doubt a bunch of other RISC processor suppliers would try to argue. But the numbers above speak volumes.

It is hard to bet against x86 in the data centre, given that curve and the amount of investment Intel can bring to bear thanks to its control of the PC business. And the fact that 72 per cent of all server spending in 2011 was on x86-based iron. But there are a few problems with extrapolating from those curves too far into the future.

The first is that various niche chips, such as Tilera's GX3000 and Adapteva's Epiphany, are trying to come at the server market from an oblique angle, eating into modern data centre workloads - such as web caching and big data munching - where an x86 chip may not yield the best bang for the buck or performance per watt.

And while these niche architectures do not wish to compete against x86 servers, the very fact that x86 servers dominate distributed computing in the data centre means that these exotic processors, and the niche server makers who are playing around with them, are effectively comparing themselves to two-socket Xeon boxes or, occasionally, super-dense microservers based on Atom processors.

AMD has bought itself into this conversation through its acquisition of microserver upstart SeaMicro earlier this year, but has not yet demonstrated that it knows how to capitalise further on the innovative system interconnect and load balancing and IO virtualization that is embodied in the SeaMicro SM10000 machines.

The second problem is that the PC business itself, while still huge, is not expected to be the volume driver in the future that it has been over the past several decades. And Gelsinger put out a fascinating chart that he and the analysts at EMC cooked up before he took over as CEO at VMware that showed just this: 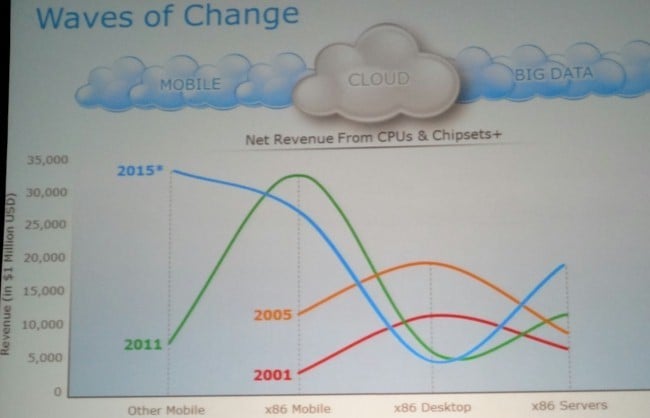 This is a fascinating graph, and it is brutally honest in a way that you wouldn't expect Intel to perhaps be. But when Gelsinger had the chart made, he was at EMC and on the East coast for several years, and soon to be at VMware. He was well out of the Intel distortion field.

As you can see, this chart plots sales of x86 processors and chipsets (from all vendors) for desktop, mobile, and servers against other non-x86 processor revenues used for mobile devices such as laptops, smartphones, and tablets. (It is mostly smartphones.)

In 2001, there were no smartphones to speak of, and the x86 processor business was dominated by desktop product sales. There was some mobile device sales (about a quarter of that of desktops) and servers came in with a little bit less than that. But presumably a lot more profit was trousered from those server CPU and chipset sales. In 2005, as the PC business expanded around the world, more people bought laptops and desktops and the server business expanded a bit thanks to market share gains. A few years later, tablets and smartphones exploded on the scene, and by 2011, the x86 laptop market had exploded, the x86 desktop business has collapsed and the server market was still expanding, eating market share thanks to Windows and Linux and the propensity to put new workloads on these two platforms and almost always on x86 platforms.

Now, shift forward to 2015, and see what Gelsinger and the EMC analysts who put this prognostication together think will happen. Mobile devices based on non-x86 architectures are going to be the largest part of the IT ecosystem, pushing around $34bn in chip and chipset revenues, followed by mobile x86 devices (mostly laptops but some tablets and smartphones) driving maybe $27bn in revenues in CPUs and chipsets, and x86-based servers pushing maybe $18bn in revenues. The x86-based PC desktop is languishing around maybe $5bn in processor and chipset sales. No better than 2011, and far, far worse than 2005.

"Our expectation is that it all moves to the edge," Gelsinger explained, referring to processor and chipset revenues. "It is either associated with the data centre or the mobile devices. Pretty much, nothing in the middle matters anymore."

When questioned about the assumptions in this chart, asked specifically if ARM could wiggle its way into the data centre through servers or other devices, Gelsinger showed that he is still a little Intel inside. "Possibly, but I don't think so, despite my deference to my x86 heritage. At the same time, I see the data centre as an all-x86 world, and I am very biased for x86 on one side, and ARM on the other. I may be wrong, but I am not in doubt." (That last bit was Gelsinger making a joke about his own certainty.)

The reason why Gelsinger, as well as Intel and all of its server partners for that matter, thinks x86 chips are entrenched in data centres is that the hard-fought homogenisation of server hardware is not something customers want to give up. Having one pool of processor types that can run Windows and Linux workloads and all of the popular middleware, databases, and applications, makes things easier. Moreover, according to Gelsinger, when ARM server parts finally do come to market, the difference between a low-voltage x86 part and a high-end ARM part will not be significant.

Next page: ARM hegemony: The other possibility
Page: