ISS 'nauts pop out to fix a radiator... in SPACE

International Space Station crew members are currently spacewalking around outside the cosmic laboratory to configure one of its solar arrays. 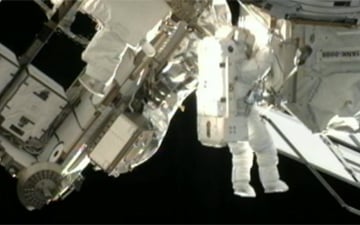 If this bit of rejigging works, mission boffins will have to decide if that's a good enough fix or if they want some other 'nauts to get out there and replace the radiator another time.

Expedition 33 leader Williams has walked into space six times before this and spent over 44 hours out in the cosmos, the record for a female astronaut. This walk will also give flight engineer Hoshide the record for the longest time outside out of all Japanese 'nauts. ®