Home Secretary Theresa May appeared before peers and MPs in Westminster on Wednesday afternoon to face questions about her proposed communications data bill, which has been almost universally rejected by people outside the security services bubble. 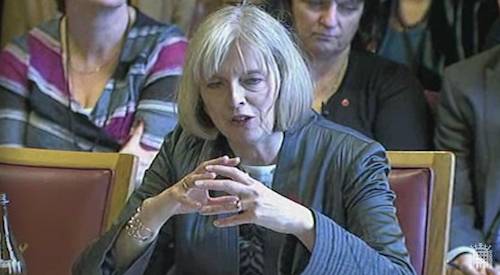 Her Hallowe'en session was the final one to provide evidence on the supposed merits of the draft legislation that could see British citizens' web activity much more heavily spied upon by spooks and police. The agents of the state would, of course, be acting to protect the public from the threat of terrorism and other criminality.

The cabinet minister's appearance served as something of a bookend to her grilling by the Home Affairs select committee in April this year when May trotted out similar justifications for increasing the powers of security services and other government bodies on surveillance of the internet.

May, suffering from a heavy cold, was quizzed in a packed session. Politicos expressed clear concerns that the Home Secretary was providing far too much wriggle room within a number of clauses that could, in the Home Sec's language, "future proof" the government's powers as technology continues to adapt and develop.

That concept was largely pooh-poohed by the panel, however, who repeatedly asked the minister to provide clear assurances about the Home Office's intentions by effectively recognising the need to re-draft some aspects of the proposals.

As in April this year, May repeated her belief that some aspects of the planned legislative overhaul had been "misinterpreted" by civil liberties campaigners and reports in the press.

May said in relation to content and not communications data:

"We don't want to look at the content of these emails - this is sadly one of the myths that has appeared in public."

The Home Secretary went on to claim that her department had "had a number of discussions with a number of CSPs [communications service providers] about the who, where, when and how".

She further claimed: "There is limited scope for the data we want to have access to. The bill is not intended to take us any further than that."

May said that "flexibility" needed to be built into any such legislation to prevent the Home Office having "to constantly come back because of too tight a definition".

When pushed about the UK potentially becoming the first democracy to collect data via ISPs through Deep Packet Inspection (DPI) probes - colloquially dubbed black boxes - which have only been implemented on a national scale in China, Iran and Kazakhstan to date, the Home Sec was somewhat uncommunicative.

"There's been quite a lot of discussion about the technicalities ... I'm willing to go into more technical detail in writing or for another private session," she retorted.

The committee's chair Lord Blencathra agreed to this plan, but asked May to get her facts together "as urgently as possible".

The Secretary went on to insist that comms data could be separated out from content, though some experts have questioned how such sifting of information on such a large scale might be achieved without revealing some sensitive data to the CSPs who would be required under such a law to retain much more info on their subscribers.

May went on to admit, however, that "at some point in the future if it became the case that you couldn't divide comms data from content [because of the development of technology] then we'd need to look at that".

Sadly, at that point the committee failed to ask what this meant for those well-known websites such as Google, Facebook and Twitter that are now moving to encrypt their pages.

The minister was repeatedly pressed about the talks the Home Office has claimed already to have had with CSPs - many of whom have said there has been little or no consultation to date by May's department on the bill.

She said: "We have had good discussions with a number of CSPs in the run up to this bill being published. Going forward we would expect that to be much more detailed."

When asked about security concerns relating to the retention of data held by private companies to help police and spooks access information about alleged crims, May appeared relieved to note that such data would not be in the hands of public sector - which has an abysmal track record on data protection.

She added: "CSPs are holding significant amounts of data about people's communications as we speak. This is not a new concept."

May further asserted that the concept of corporations ring-fencing such data would "not be changed by the nature of this bill".

After a break in the session, the Home Sec returned to respond only briefly to questions about cost savings of £6bn over the next 10 years, which was described by the committee's chair as "fanciful".

Perhaps unsurprisingly, May struggled to explain how her department had calculated that the proposals would cost £1.8bn from the public purse over the next decade.

She told MPs and peers that the Home Office had not been sitting around "totting up" such figures, and that she would be able to justify the costs in due course.

The chair brought the session to an end by asking May if large parts of the draft bill would have to be rewritten in light of the committee hearings, the evidence gathered and the level of opposition to the current plan.

The Home Sec said she would only comment on that after the cross-parliamentary reports from the sessions had been published. May did concede that elements of the bill - which she claimed had been misinterpreted - would be addressed, however.

She was then dismissed and advised to take a swig of hot water, whiskey and honey to fix that nasty cold. ®