Could be a shaggy Sasquatch story

An Idaho scientist is planning on trying a new tack to hunt down the elusive Bigfoot, which is thought by some to inhabit the wild forests of America, by using a blimp.

Jeffrey Meldrum, an anatomy and anthropology professor at Idaho State University, is looking to raise $300,000 to build a remote-controlled airship armed with a thermal imaging camera that will be used to float above the forests and find the hairy beast, which Meldrum believes exists.

"The challenge with any animal that is rare, solitary, nocturnal, and far-ranging in habitat is to find them and observe them in the wild; this technology provides for that," Meldrum told Reuters.

Meldrum, who authored the book Sasquatch: Legend Meets Science, insists the Bigfoot story is worthy of scientific investigation, and he has examined as much evidence as he can about the creature. He believes Bigfoot could be an ape which migrated to the US via the Bering Strait at around the same time that humans crossed over and spread across the Americas.

The airship plan, dubbed The Falcon Project, already has the backing of Utah gold dredger William Barnes, who is heading the team to get the drone built and operated. Barnes claims to have had an encounter with Bigfoot himself in 1997, which he described as a hairy, but "well-manicured," beast. 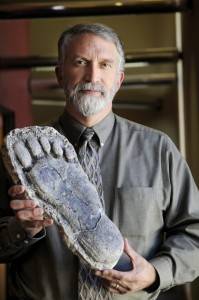 Jeffrey Meldrum and his area of interest

Provided they can get funding, the team plans to have the blimp airborne by next spring and wants it to survey the forest of the Pacific Northwest and Canada. Any unexplained sightings would be relayed to teams on the ground for investigation and possibly to "try and make contact."

Meldrum has faced ridicule from his scientific peers for his investigations into the Bigfoot phenomenon, but essentially he's trying to apply scientific method to the issue of whether or not the creature exists. During his career he had published many papers on primate bipedal locomotion before getting involved in Sasquatch-related shenanigans.

Many human cultures have folk tales of wild, man-like creatures living in the wilderness. Possibly the most famous is the Himalayan Yeti, but the Australians have the Yowie and Native American tribes have their own tales of woodland folk stretching back to before European settlers arrived. Similarly, the stories of Bigfoot have refused to die.

Idaho State University has approved Meldrum's work on the project, although he'll have to find funding for the blimp himself. ®