Sysadmins: Basically a happy lot, but frustrated and underpaid

In old days, you used to throw raw meat into the glass house with an occasional paycheck and the mainframes pumped out the reports and processed the transactions somewhat magically as far as managers and users were concerned. But these days, all users are acquainted with computers and they know exactly who to blame – system administrators – when something goes wrong and they need to power cycle their PCs.

SolarWinds, which makes a suite of system, network, and application management tools that are designed to make life easier for system administrators, wants to know what these guys and gals are thinking. So last month it commissioned RedShift Research to survey 401 US-based sysadmins to ask them about work and home life, gauging everything from how they are perceived by other employees at their companies, how their IT operations are running, and what they do when they are not being bothered by alerts on their smartphone of choice.

Like most of us these days, sysadmins polled by RedShift said that they were feeling rising demands at work, including more responsibilities and more time commitments. They are also wrestling with increasing system complexity as servers, networks, and storage are all being virtualized and the barriers between those three parts of the system are getting smeared.

But having said that, about three-quarters of those polled said that they were satisfied with their careers even with the increased pressure. (You can see a slideshare of the survey results here.)

Only one in five of the sysadmins polled on behalf of SolarWinds said they were highly appreciated and that they found work highly enjoyable, but the bell curves for job satisfaction and job recognition are probably not much different from what you would expect:

Sysadmins have mixed job satisfaction and recognition from those they serve

A stunning 89 per cent of those sysadmins polled said their machines are more reliable and efficient than in the past – which would seem to be a requirement for the job – and 82 per cent said their IT department was "in a better position than in the past year," whatever that might imply.

A nearly identical number of the admins polled said they trusted the leaders of their companies, and 79 per cent of them said that their companies would grow in 2013 (presumably, this was a gauge of revenues, not profits). But they are less optimistic about the IT budget in some cases:

Budgets are not expected to change much, on average, in the coming year

If you do the weighted average of the numbers above, you get an average IT budget increase of three-tenths of a point. Which ain't much.

So just what are they doing? Maintaining and operating systems and networks is the bulk of the work, but they are also spending time procuring new hardware and rolling out software on it, dealing with service outages, installing networks, checking for security breaches and tweaking security on systems and networks. About 26 per cent of those polled said they were also doing some light programming.

Now for the serious stuff

Interestingly, 35 percent of those sysadmins polled were women, with the other 65 percent being men. (I don't think the poll gave alternative other options.) While that is not a 50-50 split as you'd expect in the population at large, there may be more women working as sysadmins than you might have expected.

They are not all crazy gamers chugging cases of Jolt Red Bull, either. But like other techies in other fields, sysadmins enjoy playing video games, watching sci-fi movies and TV shows, arguing about who is the most badass superhero.

Living in the IT trenches as they do, it is perhaps not much of a surprise that sysadmins think Call of Duty is the best game: 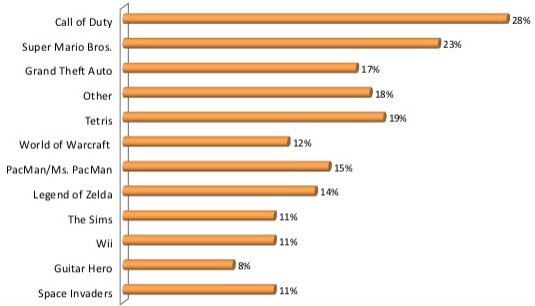 Call of Duty beats out Crysis bigtime among sysadmins

What the hell happened to Crysis? Who are these people?

On the ever-controversial fight over what is the best sci-fi movie franchise, Star Wars edged out Star Trek and Lord of the Rings, and all three beat out The Matrix. (Too much like work, I guess).

Sysadmins watch the same stuff we all do - except ALF

On the TV front, I don't know anyone who ever watched ALF, but 4 per cent of those polled did. The Star Trek franchise beat out Big Bang Theory by four points among the series that SolarWinds gave out as options.

Clearly, the best thing for any sysadmin to encourage anyone to watch to understand their work day would be The IT Crowd. Then again, maybe not. It may be a little too accurate. ®

Why not recruit mature folk from outside industry? Why not keep experience in place for longer
Offbeat1 Dec 2022 | 147

Reg readers tell us what they wanted for SysAdmin Appreciation Day