'Censorship threat to a major part of the Danish cultural heritage'

Photos A Danish author's ebooks documenting freewheeling hippie nudity have been rejected from Apple's iBookstore in that country, even after the author and publisher covered up the offending naughty bits – with images of ripe red apples.

"Apple founder, Steve Jobs, marketed himself as a child of the hippie movement," author Peter Øvig Knudsen wrote in an open letter (Google Translate) to the Danish Minister of Culture Uffe Elbaek.

"Jobs has said that he got some of his most important insights from LSD and was driven by the desire to ensure peoples of the world easy access to art and knowledge," Knudsen wrote. "Our experience shows the exact opposite."

At issue are two ebooks for the iPhone and iPad (Google Translate). These are not mere tacky T&A teasers; 14 of the images are from acclaimed photographer Gregers Nielsen – "perhaps his generation's greatest documentary photographer," Knudsen argues – and 15 are by well-recognized artist Bjørn Nørgaard.

"We are talking about a censorship threat to a major part of the Danish cultural heritage", Knudsen writes. 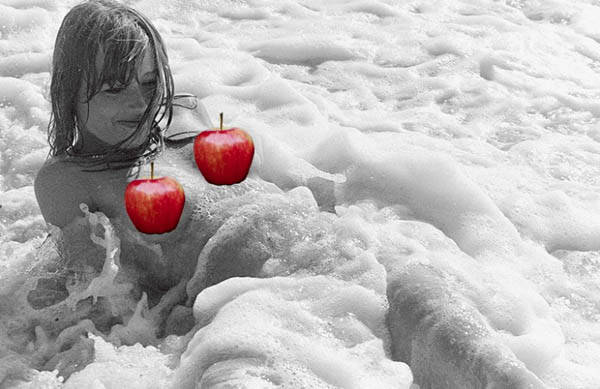 Knudsen's Hippie Company (Google Translate) first tried to get uncensored version of the two ebooks Hippie 1 and Hippie 2 into Apple's iBookstore, but as Hippie Company reported in a press release (Google Translate), Apple required the images to be censored. The publisher then did so by placing red apples over the exposed breasts, penises, and what have you, then resubmitted the two ebooks. 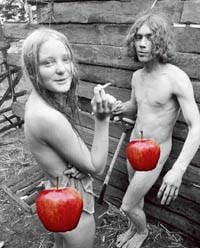 Apple then accepted them, and put them up on its Denmark iBookstore. However, Hippie Company's witty censorship methodology was apparently not appreciated: after four days, they were removed. The publisher has asked Apple to explain the removal, but has not received a reply.

"I and Hippie Company ... tried to get into negotiations with Apple and explain to them that there is a serious, historical-documentary book reproduction of Danish press photo and works of art from the period 1967-70," Knudsen writes.

Knudsen has a point. The two publications document Denmark's flourishing hippie movement, with Hippie 2 focusing on "the great experiment in creating a new society in a field near the village Frøstrup in Thy." Surely both sociologists and cultural historians would find the books of interest – as would anyone else who enjoys the sight of youthful ... mmm ... exuberance.

"The case was already absurd, and now it becomes difficult to find the words," Knudsen writes. "Will Apple prohibit using apples to perform the censorship they require?" 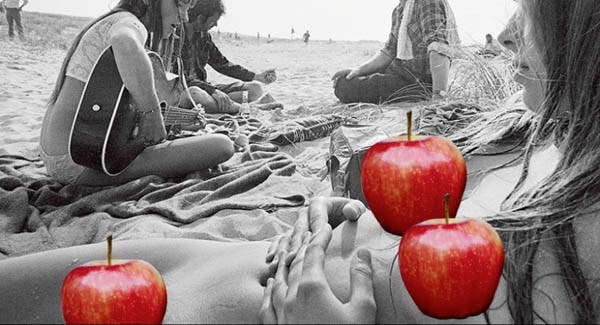 Ah, 1970, when many played the guitar and many sunbathed nude

To be sure, the books can be easily purchased from Hippie Company in many formats, but The Reg believes that Knudsen made a valid point in his open letter to Elbaek. "I am deeply concerned," he wrote, "about a development in which a single foreign player via a high market share may eventually determine which e-books actually are widely available on the Danish market."

You can form your own opinion of the offensiveness quotient of the images that prompted this censorship squabble by viewing the decidedly Not Safe For Work photos of those frolicking hippies, both before and after the application of their censoring apples (Google Translate), on Hippie Company's website. ®