Previously confined to smartphone apps, the photo-furtling social network Instagram is now shifting to the web with all users automatically getting web profiles in the next week.

Instagram announced web profiles today and surprise surprise the format of the new web profiles looks a lot like profiles do Facebook, suggesting the beginnings of merge between the two networks.

The Instagram profile page has the same format as FB with the bar of images at the top, strip of photos below and inset profile picture on the left centre. 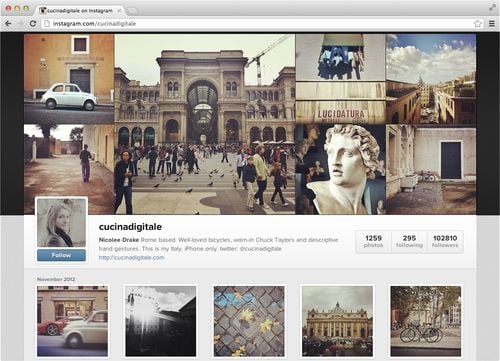 'Grammers can view and edit their photos and then follow, like and comment on other people's streams. Users set to private will only be visible to logged-in followers.

Instagram web is rolling out to users from today, but in a staggered way. We note that brands have been among the first to receive their new web profiles - Instagram Nike, for example. Something surely encouraged by Instagram's new masters.

Reaction from the photo-furtling hipsters was largely positive. @RicRiley tweeted:

Finally an instagram web profile! We should of had one of these ages ago.

Though some bemoaned the exposure of their intimate breakfast shots to the undiscerning masses of the interweb. OlivierLegris tweeted:

Short-form competitor Twitter is adding photo filters to its built-in photo apps but Instagram founder Kevin Systrom described himself on Monday as "not too worried" - probably because he has already sold his company to Facebook for $715 million. ®