Cray scales to over 100 petaflops with 'Cascade' XC30 behemoth

Cray forges Aries in the war for on toruses

The Aries chip has 217 million gates and Cray has chosen Taiwan Semiconductor Manufacturing Corp as the foundry to build it, and uses its 40 nanometer processes for etching. Cray has used IBM as a foundry in the past for interconnect chips, but being rivals in the supercomputer racket, Cray is no doubt more comfortable with TSMC these days.

The Aries chip has 184 SERDES lanes, with 30 being optical links, 90 being electrical, and 64 being PCI-Express. Cray has reserved the right to tweak the Aries chip if needed as part of its deal with Intel, and enhanced versions could come out between now and 2016. But Cray is making no promises. 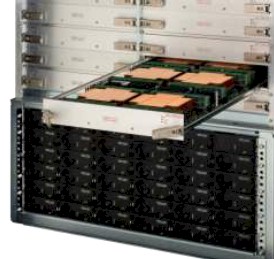 The Cascade chassis sticking its blade tongue out

The XC30 system has half-width, full-depth horizontal blades that contain a base with a single Aries interconnect on the back of the blade. This Aries chip links into the chassis backplane and the four server nodes on the blade.

These blades are implemented on what Cray calls a processor daughter card, and the all-CPU version has two of these processor daughters(two two-socket nodes) that sit side by side in the chassis and link to the Aries interconnect via PCI-Express pipes, for a total of four nodes per blade.

Incidentally, with the XE6 machines, you needed two Gemini chips on each blade to connect four two-socket Opteron nodes into the Gemini interconnect. But with the Aries machines, with their different Dragonfly topology, you only need one Aries chip for the four nodes on the blade. This will be a big cost savings for Cray.

Those processor daughter cards have four Xeon E5 sockets (linked in pairs by Intel's C600 chipset) and have four memory slots per socket. 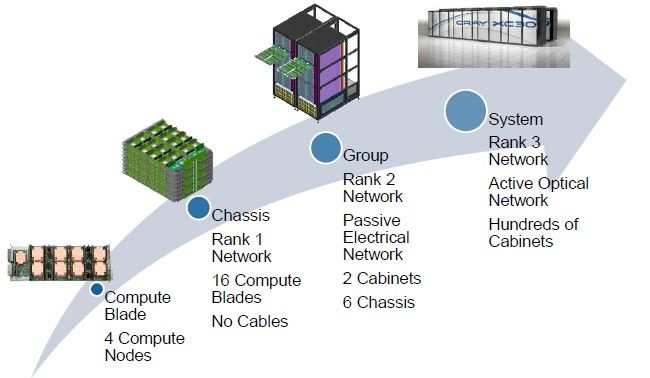 How the Cascade system is built up

Cascade uses custom cabinets that are slightly bigger than industry standard, which is something you can get away with when you are selling supercomputers that cost tens to hundreds of millions of dollars and data centers are built around them.

There are four nodes on each Cascade blade, and you put sixteen of these into a chassis. The cableless Rank 1 network is used to link the blades in the chassis together. You put three enclosures in a rack and two racks side-by-side, and this is a Cascade group.

This uses a passive electrical network to link the nodes together through the Aries interconnect controllers. Using current Xeon E5 processors and no x86 or GPU accelerators, these two cabinets yield around 120 teraflops of peak computing performance.

An XC30 system has hundreds of cabinets and uses an active optical network, which also hangs off those Aries chips, to link nodes to each other. A top-end system would have close to 200 cabinets, the same size as the "Jaguar" and now "Titan" supercomputers at Oak Ridge, but offer twice the number of x86 sockets per cabinet due to more dense packaging. 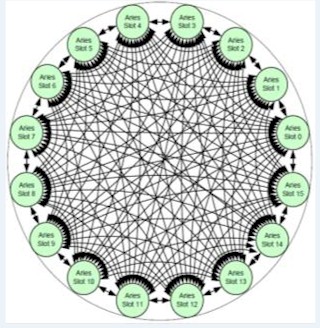 The Dragonfly topology implemented by the Aries chip

Bolding says that Titan at 200 cabinets and "Blue Waters" at the University of Illinois, which is slated to eventually have 276 cabinets, pushes the limits of the Gemini interconnect. And as you scale up, adding more dimensions to the torus perhaps, you reach some limits.

Cray is very fond of the 3D torus that SeaStar and Gemini did, but it shifted to the Dragonfly interconnect, designed by former Cray CTO Steve Scott (now at Nvidia as Tesla CTO) and Bill Dally, a hot-shot compsci expert at Stanford University who does double duty as Nvidia chief scientist.

"Torus is something we really like, but it's expensive," explains Bolding. "Dragonfly gives you all of the bandwidth of fat tree, but at the cost of a torus. And Dragonfly is free from the locality of the torus, too."

That is because the new Dragonfly interconnect allows all of the nodes talk directly to each other, which means you don't have to try to have nodes physically adjacent to each other that are doing computationally adjacent work to avoid a heavy latency penalty.

Not every node is only one hop away, of course. On a fully configured system, you are five hopes away maximum from any socket, so there is some latency. But the delta is pretty small with Dragonfly, with a minimum of about 1.2 microseconds for a short hop, about 1.5 microseconds for an average number of hops (three-ish), and a maximum of 1.7 microseconds for the five-hop jump, according to Bolding.

That latter bit of magic – low latency for five hops – is made possible by the adaptive routing coded into the Aries interconnect. "There are multiple routes from any node, and we can re-route to avoid congestion," says Bolding. "So it doesn't matter where you place jobs. In fact, a random assignment of jobs is probably better, unlike a torus interconnect, which wants jobs to be localized."

Cray is still putting together the performance specs of Aries, but Bolding dropped a few hints. The injection rate out of any PCI-Express 3.0 port on real workloads into the Aries interconnect is on the order of 8GB/sec to 10GB/sec. The more you load up the XC30 machine, the better it performs compared to the XE6 machine.

At a chassis level, the loaded injection bandwidth is on the order of 2X of that on the XE machine, and on a big box with ten cabinets or more where the whole system is used, its more on the order of 3X. The Dragonfly topology and Aries interconnect has 20X the global bandwidth as the 3D torus-Gemini combo, too.

The other thing that is important about the Dragonfly topology is that it is easier to build up. On the Blue Waters machine that Cray is building, you can't just add one cabinet to the box because you have to build on the 3D torus in a way that everything can still route to everything else.

In fact, you have to add a row of a dozen cabinets at a time to keep the shape of the torus. With Aries, you can add a single group at a time, which is only two cabinets.

Assuming a certainly level of CPU performance enhancements and the addition of GPU or x86 coprocessors, Bolding says that the Aries machine will be able to scale well above 100 petaflops over the next three to four years.

To add support for Intel's Xeon Phi x86 coprocessor or Nvidia's Tesla K20 coprocessor, you just take out half one of the processor daughter cards with CPUs and add a new one in with accelerators. The CPU cards link to the accelerators over PCI-Express, and then on the other side the CPUs link to Aries through PCI-Express links.

Cray did not announce pricing on the XC30 system, but Bolding said that the intent of the design was to bring more scalability at about the same cost per socket as the XE6 systems.

Cray has shipped six early Cascade systems already – HLRS in Germany, Kyoto University in Japan, NERSC in the US, CSC in Finland, Pawsey in Australia, and CSCS in Switzerland, all deals that El Reg has covered – and will make the machines generally available in the first quarter of 2013, as planned.

Cray did not announce any intent to support Opteron processors with the XC30 systems, as it has not for several years now, and that stands to reason considering how tightly Cray's future is linked to Intel. But equally importantly, the Opteron chips, even the Opteron 6300s announced this week, do not support PCI-Express 3 links either through the chipset or the CPU itself. That's a problem right there.

As for the future, what Cray would say is that it is working on a midrange Cascade system that would offer from tens to thousands of processors and use a lower-cost cooling system than the XC30s.

This machine is not going to be called the XC30m, says Bolding, in keeping with past naming conventions (for reasons Bolding did not explain) and it will be available in the second quarter of 2013.

Blowing in one side of the aisle and out the other

One of the other innovations with the Cascade machines is a new transverse cooling system that blows air through a row of racks, and that magically has the output temperature at one end of the row the same as the intake temperature at the other end.

The transverse cooling of the XC30 supercomputer

With this design, there are hot-swap blowers on the left side of each cabinet and vertical water chillers inside the cabinet on the right side. The cold air from the data center enters the blowers, goes across the blades and chills them; then the vertical chillers in the cabinet cools the air back down to ambient data center temperature and passes it to the next set of blowers in the row of machines.

By doing it this way, you don't create hot or cold aisles. Bolding also says that the blowers are super quiet, and you don't need water or R134 coolant.

When El Reg asked why it took Cray so freaking long to come up with this relatively simply idea (which we didn't think of either), Bolding had a good laugh and did not say we were wrong when we suggested that engineers sometimes keep ideas in reserve for emergencies and continued employment. ®

All-AMD US Frontier supercomputer ousts Japan's Fugaku as No. 1 in Top500

Atos pushes out HPC cloud services based on Nimbix tech