Astroboffins have found another super-Earth planet orbiting a star just 42 light years away from home, but this one could support life as we know it. 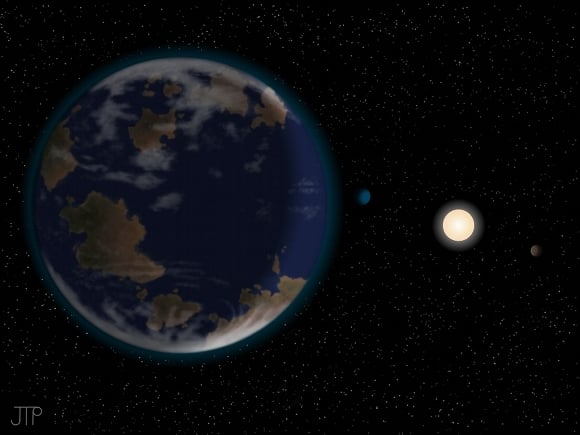 Star HD40307 has been checked out before, and in the first investigation, three massive planets were found - but all of them were fiery worlds orbiting too close to their sun to have water or life on their surfaces.

"The longer orbit of the new planet means that its climate and atmosphere may be just right to support life," Hugh Jones, also a researcher at Hertfordshire, said. "Just as Goldilocks liked her porridge to be neither too hot nor too cold but just right, this planet or indeed any moons that it has lie in an orbit comparable to Earth, increasing the probability of it being habitable."

The boffins calculate that HD40307g has about seven times the mass of Earth, and lies at such a distance from HD40307 that it isn't "tidally locked" with one face constantly pointed at its sun - thus it has days and nights, and is potentially much more hospitable to life. The scientists don't know how large it is, or even for sure that it is a rocky world like ours, which makes it hard to say just how strong the gravity on the surface might be. However it seems safe to say that if the planet is indeed rocky it probably has a much stronger surface gravity than Earth does - depending how much larger it is - which would make it hard for un-adapted humans to live there (having got there somehow). Any resident aliens or future human colonists would probably be extremely physically powerful compared to Earth residents, along the lines of the heavy-world people or lifeforms found in science fiction*.

The researchers found the new planet using new data analysis techniques to reduce the interference in the information from the High Accuracy Radial velocity Planet Searcher (HARPS). HARPS is part of the European Southern Observatory in Chile and it picks up the tiny gravity wobbles an orbiting planet causes in its sun.

Earlier this year, that other planet-searching mission, Kepler, found a planet with a similar orbit, but that world, called Kepler 22b, is 600 light years away, making HD40307g the nearest possible climate change/nuclear devastation/apocalypse escape route.

"The star HD 40307 is a perfectly quiet old dwarf star, so there is no reason why such a planet could not sustain an Earth-like climate," Anglada-Escude said.

The full study, available here (PDF), will be published in Astronomy & Astrophysics. ®

*E E "Doc" Smith wrote of Valeria, a heavy-grav planet colonised by Dutch diamond miners in the Lensman series. The Valerian colonists were huge and powerful, often used as close-combat troops by the Galactic Patrol in their battles against Boskone.

Larry Niven for his part came up with Jinx, an ovoid moon orbiting a gas-giant primary, which also had very heavy gravity. Its curious shape combined with the steep pressure gradient resulting from high gravity meant that some regions of its surface poked out into the vacuum of space while others were uninhabitable due to very high air pressure. Jinxian colonists in the Known Space series were similarly strong, but short and squat as opposed to the huge Valerians. Jinx also had intelligent alien life, the dangerous Bandersnatch. - Ed