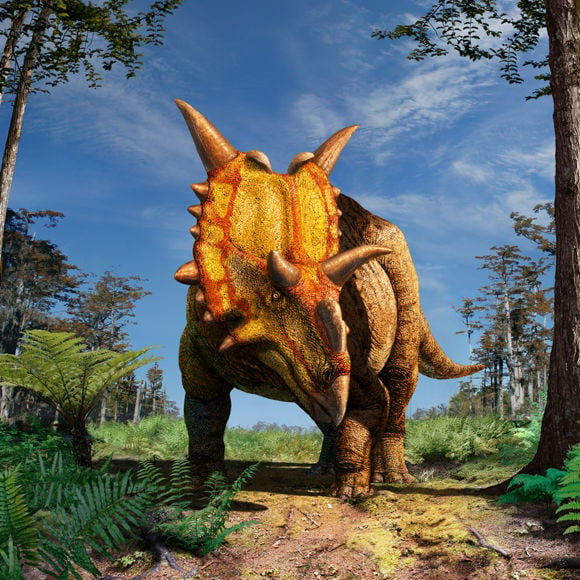 The newly named Xenoceratops foremostensis was around 20 feet long, weighed two tons and is the oldest known large-bodied horned dinosaur from Canada. Luckily old Xeno, pieced together from fossils originally collected in 1958, was a plant-eater.

"Xenoceratops shows us that even the geologically oldest ceratopsids had massive spikes on their head shields and that their cranial ornamentation would only become more elaborate as new species evolved."

The boffins named it “alien horned-face” – Xenoceratops - because of the weird pattern of horns on its head and the scarcity of other horned dinosaurs back when it was around.

"Xenoceratops provides new information on the early evolution of ceratopsids, the group of large-bodied horned dinosaurs that includes Triceratops," said co-author Dr. David Evans of the Royal Ontario Museum and University of Toronto. "The early fossil record of ceratopsids remains scant, and this discovery highlights just how much more there is to learn about the origin of this diverse group."

The researchers figured out Xenoceratops existed from skull fragments found by at least three different people in the 1950s, housed at the Canadian Museum of Nature. Evans stumbled on the undescribed material over ten years ago and recognized the bones as a new type of dinosaur. ®