This is Frankfurt calling: Scattered outbreaks of hot crunchiness

Sysadmins use storage too...

It is not necessary to have leading edge technology products across the storage spectrum. Sometimes just having products that work and do things that no other vendor does is enough. So it is with cross-vendor, end-to-end system management tools.

SolarWinds software provides network, systems, virtualisation and storage resource management, but is typically bought by end users rather than CIOs. Our impression is that a general IT sysadmin can use the software to troubleshoot problems without having to become a Fibre Channel specialist or a VMware expert.

The suite includes network management - performance monitoring, traffic analysis, configuration management, user device tracking, etc, a storage manager, a log and event manager, server and application management, virtualisation manager, patch management, mobile admin and a web help desk. Many of the parts have been acquired through acquisition and they work together.

We're told by SolarWinds that shared CPU, memory, network and storage resources create contention, sand that storage problems are difficult to diagnose from a system level. The visibility provided by vendor's own tools is poor and limited. If you don't know whether a physical server, an ESXi host or a virtual machine is taking up most of your storage bandwidth you can use SolarWinds' tools to drill down to the physical storage, map it upstream to physical and virtual servers and see where the bandwidth hogging is taking place. 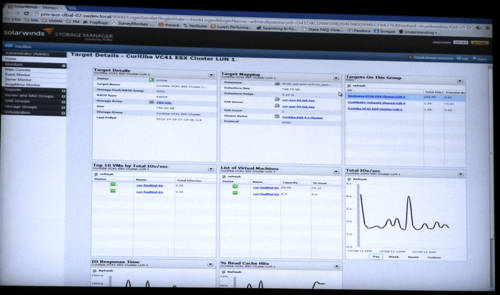 SolarWinds sells lots of low-cost products via a try-and-buy web download scheme, and over a million people have downloaded its free tools.

Virtual Instruments (VI) takes the opposite tack to SolarWinds. Where SolarWinds is broad and relatively shallow, Virtual Instruments is narrow and deep. It produces a leading edge technology product that is tightly focused on Fibre Channel (FC) storage fabrics and provides deep inspection capabilities looking into what's happening across a fabric. There's background info here. 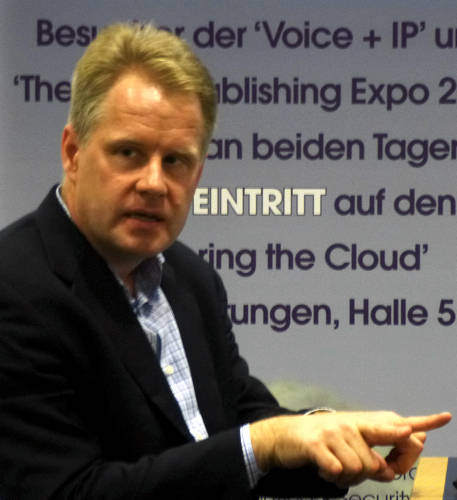 At a briefing in Frankfurt given by VI chief technology officer Skip Bacon, we were told VI revenues were doubling annually and closer to trebling annually in Europe.

He said VI had both big blue chip customers with FC SANs and lots of small and medium enterprises (SMEs) with high criticality apps dependent on their FC SANs: "SAN performance and availability criticality is key for a VI customer," he said.

It's all about measuring performance but not just of the FC part of a SAN-to-end user link, says Bacon. In the storage world VI looks at I/Os through the system, and not just IOPS. It measures FC data traffic at low granularity, using a 2.5ns clock, not hourly - that's far too slow. Bacon says: "You have to measure true performance and measure it at very high frequency and very low latency. But we also talk to switches and other devices to correlate what's happening there."

VI may support AIX in 2013 and Hyper-V support could come if there is enough demand from its customers.

VI works with virtually all the vendors active in FC SANs except one; Brocade. That relationship may improve once Brocade CEO Michael Klayko leaves. Bacon says that the "anti-VI feelings" had surfaced at a high level inside Brocade.

Sort out that back-end

We were briefed by Sepaton's Tim Butchart, VP for EMEA, and talked about Sepaton's latest S2100-ES3 deduplicating array product, one with up to eight compute heads with back-end HDS HUS storage. The ES3 adds 25 per cent more capacity than Sepaton's previous top-end product,

Sepaton is winning business, Butchart said, because existing in-place dedupe systems can't scale enough as the amount of data to be backed up rises ands rises. Its systems are needed in HP's product roster because the HP in-house StoreOnce deduplication backup to disk product cannot scale up as Sepaton's systems do and can't perform as well either. StoreOnce can't replace Sepaton.

A Database Extreme feature enables databases to multi-stream data to the Sepaton boxes, shortening the database backup window. This can be turned on by a database admin person. Butchart kindly told us that an EMC Best Practices guide for its deduplicating arrays says such database multi-streaming should be turned off.

He mentioned roadmap items, such as:

We came across some HDS development nuggets. The high-end VSP has hardware assistance from seven ASICs (Application-Specific Integrated Circuits). The recent HUS VM has a single ASIC combining the functions of the VSP's seven and delivering around 50 per cent of the performance of a low-end VSP array.

HUS VM can be clustered. The VSP's high-availability controller is used to federate two HUS VMs. This will be enhanced to support four HUS VMs with full IO distribution between the nodes. THe VSP itself will be clustered or federated as well.

Lastly, HUS VM means that common technology is being used between the high-end VSP array and mid-range HUS VM. We might expect a single technology range to emerge, one offering combined file, block and object storage.

Intel has bought flash caching software supplier Nevex, which had a relationship with TMS, before IBM bought TMS. Nevex's logo has sprouted "an Intel Company" message, not that Nevex has released this factoid. The deal first became known about in August and the 451 Research Group has a report about it.

We asked a Nevex contact about this and got no reply. Why would Intel want a flash cacheing software product unless it has a flash cache hardware product to sell? Expect Intel to be more aggressive in this space in the months ahead.

We were briefed by two Active Archive Alliance people. David Cerf, EVP for corporate and business development at Crossroads, and Vint Cerf's sibling, said: "Big Data adoption at scale will be seriously inhibited unless it adopts tape."

Peter Faulhaber, president at Fujifilm Recording Media USA, said: "It's not either tape or disk. Archiving has to include both disk and tape, and sometimes SSD in an optimised infrastructure and that's what the Active Archive Alliance provides."

The topics we've covered here are the broad and effective problem solving system management approach of Solarwinds, and the deep and technical Fibre Channel fabric inspection and storage management of Virtual Instruments - with this pair of companies bing two sides of roughly the same coin.

We looked at two examples of deduplication: BridgeSTOR, which is trying to establish itself, and Sepaton, intent on remaining top of the HP and general high-end enterprise dedupe heap.

An insight into HDS's VSP-HUS VM intentions has been garnered and Intel has quietly moved to get its own software flash caching technology. What it will do with that remains to be seen, and will hopefully become clearer by SNW Europe 2013, which will once again be held in Frankfurt. ®

China is on the march, Russia loves to destabilise, no intelligence agency can stop 'em without help
Security1 Dec 2021 | 39

SolarWinds urges US judge to toss out crap infosec sueball: We got pwned by actual Russia, give us a break

Autodesk was one of the 18,000 firms breached in SolarWinds attack, firm admits

Door was opened but nobody stepped inside, luckily
Security2 Sep 2021 | 9