A Swiss designer says he has created an iPhone keyboard that turns vibrations from fingertips on a tabletop into key-presses.

Software keyboards are nothing new, and neither is the ability to project a keyboard on to any solid surface, but existing solutions need scanners or touchscreen surfaces to detect one's fingers.

But Florian Kräutli claims to have gone one step further by creating the Vibrative Virtual Keyboard: it uses the accelerometer in an iPhone 4 to sense tiny tremors from fingers hitting a table, and works out which "key" is being pressed, so once installed on a device it can turn any surface into a keyboard, in theory. 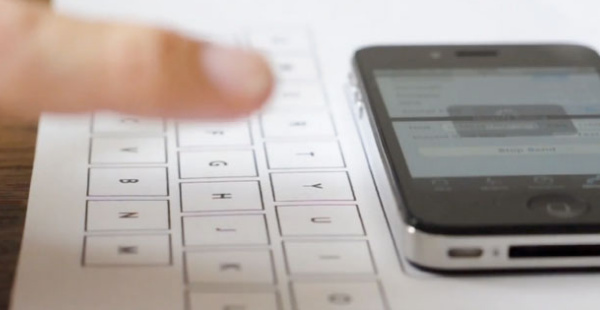 The system needs some training, and from a demonstration of the prototype tech it seems considerable pressure is needed for the mobe to detect the key presses. The Reg asked for a live demo, but we were told that we'd have to make do with a video of the inventor demonstrating the tech for the moment. The software was, we're told, developed by Kräutli for his one-year cognitive computing master's degree at Goldsmiths, University of London.

His previous work includes a radio made out of carpet.

The vibration-sensing keyboard has to be trained before it can be used, and much of the practicality of the technique will depend on how often that training has to be repeated. When we're typing on a phone we're generally trying to bash out something quick, and wouldn't want to have to spend ten minutes training the thing to work with the nearest surface. As an innovative approach it's interesting.

The increased power of mobile computing is triggering a resurgence of interest in keyboard technologies: a credit-card-sized Bluetooth keyboard and mouse costs $40 and the Asetniop tries to bring chording back into fashion for tablets.

Chording comes out on top, and once the Bluetooth Twiddler finally arrives then all other forms of input will surely fall by the wayside. In the meantime it's good to see so much innovation going on. ®